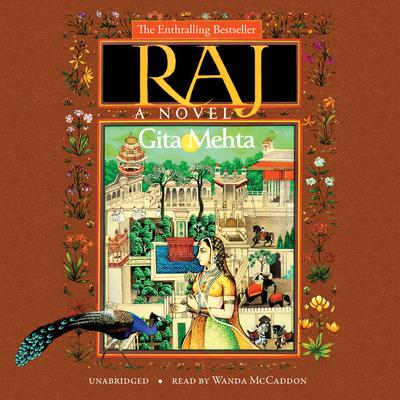 Winner of the AudioFile Earphones Award in 2000

Raj is the remarkable story of a woman of royal birth coming of age during India’s fight for independence. Jaya Singh, the intelligent, beautiful and compassionate daughter of the Maharajah and Maharani of Balmer, has been raised in the thousand-year-old tradition of purdah, a strict regime of seclusion, silence and submission. But with the premature death of her decadent, Westernized husband, Jaya must assume the role of Regent Maharani of Sirpur. She soon finds herself thrust into the center of a roiling political battle in which the future of the kingdom is at stake—it is a conflict that will force Jaya to realize her future as a leader of the Indian people in her own right.

With rare subtlety, impressive scope, and a keen eye for detail, Mehta lays bare the complexities of Indian culture and tradition as few foreigners ever experience them. Her epic is a powerful, enlightening, and finally, ennobling story of a nation struggling to be born.

“Mehta’s talent is as sharp as a laser beam.” —Sunday Times (London)
“The rich background detail is engrossing.” —Publishers Weekly
“Nadia May colors the novel with her amazing Indian dialects. Recalling the novel, one still hears the varied voices and the energy behind each. She leaves pictures in the listener’s mind.” —AudioFile
“At last, a historical that takes a fresh perspective on India under the British Raj…This shines both with moments of intimate poignancy, and a sense of the sweep of Indian affairs. An engrossing read, and strong first novel.” —Kirkus Reviews

Gita Mehta is the author of numerous bestselling books, including Karma Cola, A River Sutra, and Snakes and Ladders.