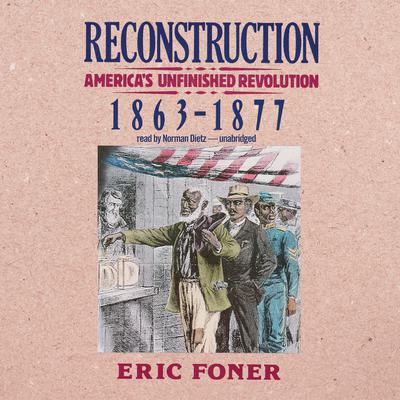 Finalist for the 1989 Pulitzer Prize for History

Finalist for the 1988 National Book Award

Winner of the 1988 Los Angeles Times Book Prize for History

Winner of the 1989 Parkman Prize

Winner of the 1989 Bancroft Prize

A PBS Pick of Books about Reconstruction

The period following the Civil War was one of the most controversial eras in American history. This comprehensive account of the period captures the drama of those turbulent years that played such an important role in shaping modern America.

Eric Foner brilliantly chronicles how Americans, black and white, responded to the unprecedented changes unleashed by the Civil War and the end of slavery. He provides fresh insights on a host of other issues, including,

This “smart book of enormous strengths” (Boston Globe) has become the classic work on the wrenching post–Civil War period, an era whose legacy reverberates in the United States to this day.

“[A] splendid book…a compelling narrative…With this book, Mr. Foner becomes the preeminent historian of Reconstruction.” —New York Times
“Eric Foner…has written the Reconstruction book for our times. Monumental in scope, ranging over the North as well as the South…a feat of research and synthesis.” —The Nation
“Long, brilliant, and stylish…[Reconstruction] is of signal importance…the most comprehensive and convincing account of the effort to build a racially democratic and just society from the fiery ruins of slavery.” —Los Angeles Times Book Review
“A heroic synthesis that should dominate the field…It gives nearly equal time to all the protagonists in the Reconstruction drama and recognizes how inextricably economic, political, social, and ideological issues are bound.” —Washington Post Book World
“This is history written on a grand scale, a masterful treatment of one of the most complex periods of American history.” —New Republic
“Reconstruction will certainly be the standard work on the subject for the foreseeable future. And with its publication, Eric Foner has emerged as the preeminent American historian of his generation.” —Civil War News
“This invaluable, definitive history re-creates the post-Civil War period as a pivotal drama in which ordinary people get equal billing with politicians and wheelers and dealers.” —Publishers Weekly

Eric Foner is the author of many award-winning books on the Civil War and Reconstruction, including the winner of the Pulitzer Prize for History, The Fiery Trial: Abraham Lincoln and American Slavery. He is the 2020 recipient of the Anisfield-Wolf Book Award for lifetime achievement. He is DeWitt Clinton Professor Emeritus of History at Columbia University.