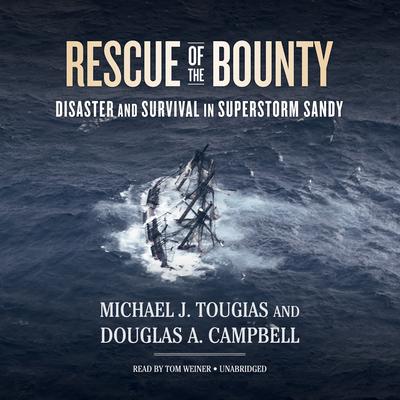 Rescue of the Bounty: Disaster and Survival in Superstorm Sandy

By Michael J. Tougias and Douglas A. Campbell
Read by Tom Weiner

Rescue of the Bounty is the harrowing story of the sinking and rescue of Bounty—the tall ship used in the classic 1962 film Mutiny on the Bounty—which was caught in the path of Hurricane Sandy with sixteen aboard.

On Thursday, October 25, 2012, Captain Robin Walbridge made the fateful decision to sail Bounty from New London, Connecticut, to St. Petersburg, Florida. Walbridge was well aware that a hurricane was forecast to travel north from the Caribbean toward the eastern seaboard. Yet the captain was determined to sail. As he explained to his crew of fifteen: A ship is always safer at sea than in port. He intended to sail "around the hurricane" and told the crew that anyone who did not want to come on the voyage could leave the ship—there would be no hard feelings. As fate would have it, no one took the captain up on his offer.

Four days into the voyage, Superstorm Sandy made an almost direct hit on Bounty. The vessel's failing pumps could not keep up with the incoming water. The ship began to lose power as it was beaten and rocked by hurricane winds that spanned eight hundred miles. A few hours later, in the dark of night, the ship suddenly overturned ninety miles off the North Carolina coast in the "Graveyard of the Atlantic," sending the crew tumbling into an ocean filled with towering thirty-foot waves. The Coast Guard then launched one of the most complex and massive rescues in its history, flying two Jayhawk helicopter crews into the hurricane and lowering rescue swimmers into the raging seas again and again, despite the danger to their own lives.

In the uproar heard across American media in the days following, a single question persisted: Why did the captain decide to sail? Through hundreds of hours of interviews with the crew members, their families, and the Coast Guard, the masterful duo of Michael J. Tougias and Douglas A. Campbell creates an in-depth portrait of the enigmatic Captain Walbridge, his motivations, and what truly occurred aboard Bounty during those terrifying days at sea.

Dripping with suspense and vivid high-stakes drama, Rescue of the Bounty is an unforgettable tale about the brutality of nature and the human will to survive.

“Riveting…breathtaking…Tougias and Campbell build tension slowly and methodically…a sound strategy that pays off when they reach the storm itself. Then, the book becomes a white-knuckled, tragic adventure experienced by recognizable and sympathetic figures.” —Richmond Times-Dispatch
“Tougias and Campbell’s well researched and very personal effort details the doubts and questions as the ship gets underway, takes you aboard as the exhausted crew struggled to keep it afloat, then into the raging sea as the soggy survivors feverishly clambered into the bouncing rafts, and onto the tossing aircraft as the Coast Guard hoisted the sailors from the maelstrom below.” —Florida Times-Union
“A book that succeeds both as a high-seas adventure and as a psychological portrait of Bounty’s ill-fated captain, Robin Walbridge…a gripping account.” —Day (New London, Connecticut)
“Tougias and Campbell superbly re-create the disastrous voyage, providing just the right amount of detail to bring every character involved in this dramatic tale to life, from Bounty captain Robin Walbridge and his shipmates to the brave Coast Guard rescue swimmers. A thrilling and perfectly paced book, Rescue of the Bounty is filled with good intentions but bad decisions, tall-ship history and current usage, and the roar and taste of the storm-whipped ocean.” —Booklist
“Tougias and Campbell review the ship’s fifty-year history, sketch the backgrounds of the sailors aboard, and offer an excruciating moment-by-moment look of the four-day voyage that killed one crew member and the captain. Relying primarily on sworn testimony from the Coast Guard’s formal investigation, the authors identify a number of factors that contributed to the disaster…Notwithstanding [Walbridge’s] huge miscalculation, the authors offer a surprisingly sympathetic portrait of the captain, crediting his compassionate manner and the respect and loyalty he inspired. Finally, they devote a thrilling portion of their narrative to the courageous Coast Guard rescue and the almost incredible efforts of the pilots, hoist crews, and swimmers who headed straight into Hurricane Sandy. A taut recounting of a needless maritime tragedy.” —Kirkus Reviews

Michael J. Tougias is a bestselling author and coauthor of numerous books for adults, including There’s a Porcupine in My Outhouse, which won the Independent Publishers Award for Best Nature Book of the Year, and The Finest Hours, the basis for a Disney movie. He has also written several books for children as part of his True Rescue series.

Douglas A. Campbell spent three decades in daily journalism, twenty-five of those years as a staff writer at the Philadelphia Inquirer, where two of his stories were nominated for the Pulitzer Prize. Campbell has sailed his own boats since 1979 and has twice competed in the biannual Bermuda One-Two race.