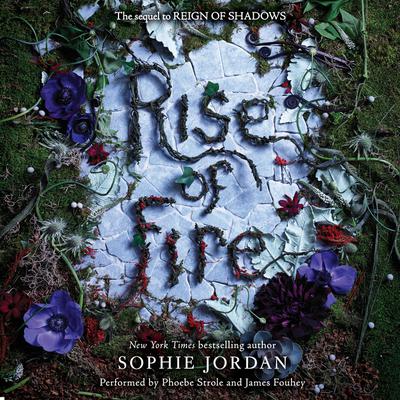 By Sophie Jordan
Read by Phoebe Strole  and James Fouhey

The Reign of Shadows Series: Book 2

Luna and Fowler have escaped the kingdom of Relhok, but they haven’t escaped the darkness. When a battle against the dark dwellers mortally injures Fowler, Luna is faced with a choice: put their fate in the hands of mysterious strangers or risk losing Fowler forever.

Desperate to keep the one bright part of her life alive, Luna accepts the help of soldiers from a nearby kingdom. Lagonia’s castle offers reprieve from the dangerous outside world—until the King discovers both Fowler and Luna’s true ties to Relhok and their influence over the throne.

Now pawns in each kingdom’s political game, Luna and Fowler are more determined than ever to escape and build the life they’ve been dreaming of. But their own pasts have a tight hold on their hearts and their destinies. Luna must embrace the darkness and fire within her before she loses not only Fowler but the power she was destined to inherit.

“An obvious choice for fans of Reign of Shadows, this is also recommended for those looking for unique takes on classic fairy-tale tropes or a YA version of Game of Thrones.” —School Library Journal
“An enjoyable tale of kings and monsters, treachery, intrigue, romance, and survival.” —VOYA

Sophie Jordan is a former high school English teacher and the author of the Firelight series as well as several romances, including the bestsellers In Scandal They Wed and Sins of a Wicked Duke.