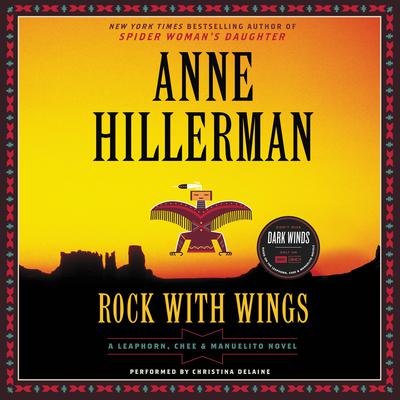 A BookPage Top Pick of Police Procedurals with an Edge

Don’t miss the TV series, Dark Winds, based on the Leaphorn, Chee, & Manuelito novels, now on AMC and AMC+!

Doing a good deed for a relative offers the perfect opportunity for Sergeant Jim Chee and his wife, Officer Bernie Manuelito, to get away from the daily grind of police work. But two cases will call them back from their short vacation and separate them—one near Shiprock, and the other at iconic Monument Valley.

Chee follows a series of seemingly random and cryptic clues that lead to a missing woman, a coldblooded suspect, and a mysterious mound of dirt and rocks that could be a gravesite. Bernie has her hands full managing the fallout from a drug bust gone wrong, uncovering the origins of a fire in the middle of nowhere, and looking into an ambitious solar energy development with long-ranging consequences for Navajo land.

Under the guidance of their mentor, retired Lieutenant Joe Leaphorn, Bernie and Chee will navigate unexpected obstacles and confront the greatest challenge yet to their skills, commitment, and courage.

“In her worthy sequel to 2013’s Spider Woman’s Daughter, Hillerman continues the exploits of the beloved Navajo cops of MWA Grand Master Tony Hillerman, Officer Bernadette Manuelito [and] Sergeant Jim Chee…Although Lieutenant Joe Leaphorn is still greatly handicapped by the injury he suffered in the previous book, his mind is sharp and his insights help both Chee and Manuelito solve some problems. Hillerman uses the southwestern setting as effectively as her late father did while skillfully combining Native American lore with present-day social issues.” —Publishers Weekly
“In this action-filled adventure, the author follows in her late father Tony Hillerman’s footsteps, blending vivid descriptions of the striking Southwestern vistas with absorbing detective work that will keep readers enthralled. Of interest to all Hillerman fans and enthusiasts of mysteries with a strong sense of place.” —Library Journal
“With a background of tribal law and custom, Anne Hillerman ties up multiple subplots in concise prose, evoking the beauty of the desert and building suspense to a perilous climax. Tony would be proud.” —Booklist
“Narrator Christina Delaine’s attractive alto voice engages the listener. She carefully uses different accents and pitches to differentiate the characters amid the spare dialogue and seems comfortable pronouncing Navajo terms and place names. This is the second of the younger Hillerman’s mysteries. It appears the elder gave his daughter the secret formula for the Chee/Leaphorn books. If anything, the younger Hillerman pays even more attention to Navajo language and custom.” —AudioFile