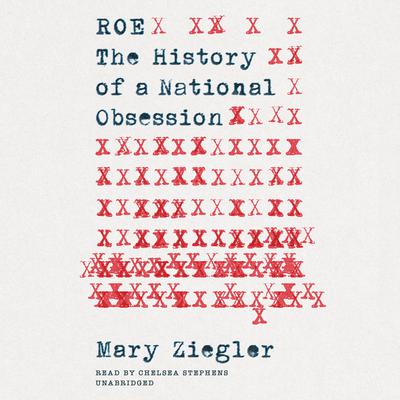 Roe: The History of a National Obsession

The leading US expert on abortion law charts the many meanings associated with Roe v. Wade during its fifty-year history

What explains the insistent pull of Roe v. Wade? Abortion law expert Mary Ziegler argues that the US Supreme Court decision, which decriminalized abortion in 1973 and was overturned in 2022, had a hold on us that was not simply the result of polarized abortion politics. Rather, Roe took on meanings far beyond its original purpose of protecting the privacy of the doctor-patient relationship. It forced us to confront questions about sexual violence, judicial activism and restraint, racial justice, religious liberty, the role of science in politics, and much more.

In this history of what the Supreme Court’s best-known decision has meant, Ziegler identifies the inconsistencies and unsettled issues in our abortion politics. She urges us to rediscover the nuance that has long resided where we would least expect to find it—in the meaning of Roe itself.

“An accessible and timely primer on the many meanings Roe has accrued in American politics, law, and culture across half a century, deepening our understanding of this polarizing constitutional landmark.” —Ken Kersch, author of Conservatives and the Constitution
“Mary Ziegler offers a brilliant and insightful analysis of the fascinating ways in which our nation’s understanding of the abortion issue has evolved over the half-century since Roe was decided.” —Geoffrey R. Stone, author of Sex and the Constitution
“With the landmark Supreme Court abortion decision as its lens, Roe offers a vivid view of the half-century of political, legal, and social conflicts over judicial activism, women’s rights, the place of religion in America, racial justice, sexuality, regional and class differences—while illuminating shifting political party positioning and pivotal individuals who resist the easy labels of polarized politics.” —Martha Minow, 300th University Professor at Harvard University

Mary Ziegler is the Martin Luther King Jr. Professor of Law at the University of California, Davis, and author of half a dozen books on the law, history, and politics of abortion and American conservatism. She lives in Sausalito, CA.