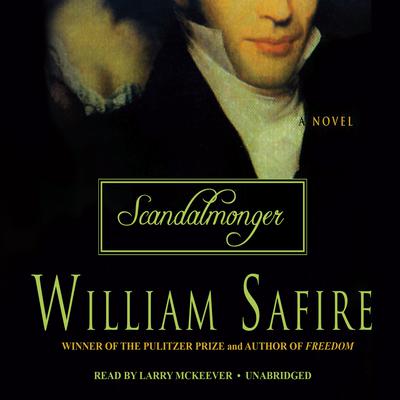 The year is 1797. Meet James Thomson Callender, a radical newspaper editor secretly on the payroll of presidential hopeful Thomas Jefferson. As a political opposition forms in our fledgling republic, Callender is hard at work starting an equally rich American tradition: muckraking journalism. His sensational exposés of the private lives of public men will come to alter the course of history and may cost him his life.

In a gripping and timely work of historical fiction, William Safire unveils the story behind the nation’s first great political scandals. With dialogue drawn from letters and historical records and notes that scrupulously separate fact from fiction, Safire’s novel is studded with masterly portraits of George Washington, John Adams, and Aaron Burr.

“Handsomely constructed and politically sophisticated.” —New York Times Book Review
“A gripping tale, a controlled and captivating web of carefully chosen truths and imagination.” —Los Angeles Times
“The plot is fascinating, the issues raised are as crucial now as they were then, and the language used in the book, as one might expect from Safire’s other role as a grammar maven, is terrific.” —San Francisco Chronicle
“A devilishly constructed entertainment about political warfare, legal brinkmanship, and assassination by quill pen.” —Time
“It’s tough, informative, colorful, and a good example of why we need scandalmongers-and newsmongers, too.” —Peggy Noonan
“Narrator Larry McKeever provid[es] the right degree of tension and drama.”  —Reviewer’s Bookwatch
“A fresh and thought-provoking look at the monument set: George Washington, John Adams, James Madison, Aaron Burr, Meriwether Lewis, James Monroe and other dead colonial all-stars are brought to life in these pages.” —Rocky Mountain News

William Safire (1929–2009) was an American journalist and presidential speechwriter, and won a Pulitzer Prize for his commentary in 1978. From 1973 to 2005 he wrote conservative political columns for the New York Times. He authored a number of books on American English and the abuses of the language.