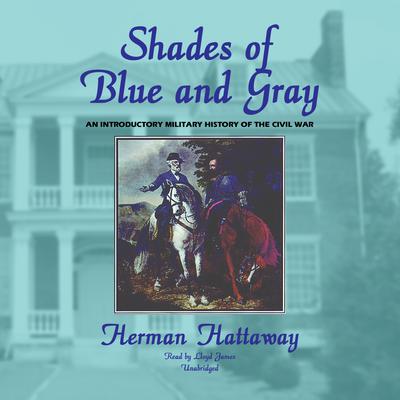 Shades of Blue and Gray: An Introductory Military History of the Civil War

Shades of Blue and Gray places the 1861–1865 conflict within the broad context of evolving warfare. Emphasizing technology and its significant impact, Hattaway includes valuable material on land and sea mines, minesweepers, hand grenades, automatic weapons, the Confederate submarine, and balloons. The evolution of professionalism in the American military serves as an important connective theme throughout. Hattaway extrapolates from recent works by revisionists William Skelton and Roy Roberts to illustrate convincingly that the development of military professionalism is not entirely a post–Civil War phenomenon.

Informative and clearly written, enhanced by graceful prose and colorful anecdotes, Shades of Blue and Gray will appeal to all listeners.

“Well organized and well-written…offers asides that may surprise even seasoned Civil War buffs.” —Publishers Weekly
“Those searching for a clear, persuasive introduction to the way in which battle shaped new strategies and a new idea of war could find no better or more compelling guide.” —Kirkus Reviews
“There is no other one-volume history of the Civil War that is so up-to-date in its author’s mastery of current scholarship, that so succinctly yet completely summarizes the military history of the war…Anything Herman Hattaway says on the Civil War has to be taken seriously.” —Russell Weigley
“The best brief military history of the Civil War available. Wonderfully clear and concise.” —George Rable

Herman Hattaway is Professor of History at the University of Missouri-Kansas City. He is the author or coauthor of numerous books, including Why the South Lost the Civil War, How the North Won, and General Stephen D. Lee, all past selections of the History Book Club.