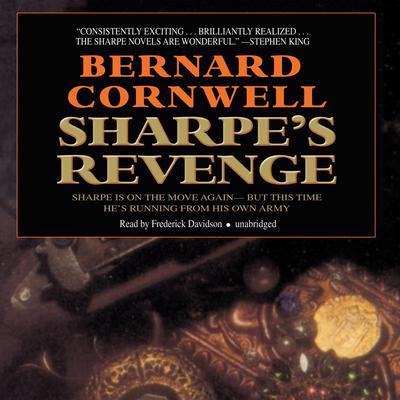 Sharpe’s Revenge: Richard Sharpe and the Peace of 1814

When his honor and reputation are at stake, Sharpe seeks revenge—at any cost.

It is 1814, and the defeat of Napoleon seems imminent—if the well-protected city of Toulouse can be conquered. For Richard Sharpe, the battle turns out to be one of the bloodiest of the Peninsula Wars, and he must draw on his last reserves of strength to lead his troops to victory.

But before Sharpe can lay down his sword, he must fight a different sort of battle. Accused of stealing Napoleon's personal treasure, Sharpe escapes from a British military court and embarks on the battle of his life, armed only with the unflinching resolve to protect his honor.

“[A] corker…Fast and gripping, the story is carried by Cornwell's easy hold on vivid period detail…Sharpe's final escape is literally dazzling. Readers will relish this adventure and eagerly await Sharpe at Waterloo.” —Publishers Weekly
“This volume, a brilliant historic action, adventure, and love story, appeals to a wide audience, much like the other titles in this fabulous series. Frederick Davidson performs an unparalleled dramatization. A fascinating and educational work that will do credit to any library.” —Library Journal
“Davidson reads in a dramatic British accent with a deadpan undertone that rivets your attention. This is a first-rate historical novel.”  —Kliatt