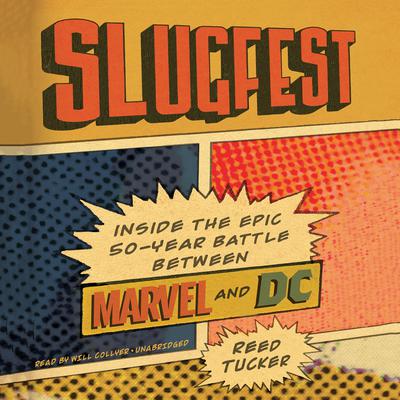 Slugfest: Inside the Epic, 50-year Battle between Marvel and DC

By Reed Tucker
Read by Will Collyer

The first in-depth, behind the scenes book treatment of the rivalry between the two comic book giants.

The most bruising battle in the superhero world isn’t between spandex-clad characters; it’s between the publishers themselves. For more than 50 years, Marvel and DC have been locked in an epic war, tirelessly trading punches and trying to do to each other what Batman regularly does to the Joker’s face. Slugfest, the first book to tell the history of this epic rivalry into a single, juicy narrative, is the story of the greatest corporate rivalry never told. It is also an alternate history of the superhero, told through the lens of these two publishers.

Slugfest combines primary-source reporting with in-depth research to create a more fun Barbarians at the Gate for the comic book industry. Complete with interviews with the major names in the industry, Slugfest reveals the arsenal of schemes the two companies have employed in their attempts to outmaneuver the competition, whether it be stealing ideas, poaching employees, planting spies, ripping off characters or launching price wars. Sometimes the feud has been vicious, at other times, more cordial. But it has never completely disappeared, and it simmers on a low boil to this day.

The competition has spilled over to the even the casual fans, bisecting the world into two opposing tribes. You are either a Marvel or a DC fan, and allegiance is hardly a trivial matter. Perhaps the most telling question one can ask of a superhero fan is, Marvel or DC? The answer often reveals something deeper about personality, and the reason is wrapped up in the history of both companies.

“People will like this audiobook, but comic book fans will go out of their minds…Narrator Will Collyer clearly explains how the upstart Marvel Comics rocked the publishing world in the early 1960s…This is an outstanding look at comic publishing from 1935 right up to the summer blockbusters of 2017.” —AudioFile
“Slugfest feels very much in its comfort zone when covering the past two decades, as Men in Black became a huge box-office hit of a small-comic adaptation, and as X-Men and Spider-Man finally found their way to the screen after years of less-than-savvy Hollywood deal making…We are sure to see a new wave of these behind-the-comics scenes books…Where there was ink, there was money. Whether the profits are flowing or drying up, comics…are as deeply human and flawed as any other great American enterprise.” —Washington Post
“Reed Tucker masterfully dissects the REAL issue dividing us as a nation.” —Seth Meyers, American comedian and televison host
“The story of Marvel’s David toppling DC’s Goliath is a fun one, and Tucker tells it well.” —Associated Press
“Insanely readable…An amazing comic-book story.” —Houston Press
“A great read for anyone interested in the history of two companies that have had a massive impact on pop culture.” —Library Journal
“Tucker uses extensive interviews with major players within the two comics giants to provide a blow-by-blow account of its victories and defeats.” —Shelf Awareness
“Well-written and entertaining…An excellent history for comic book fans.” —Publishers Weekly
“Comic-book fans will revel in the minutiae of Tucker’s account…A knockout read for capes-and-cowls aficionados.” —Kirkus Reviews

Reed Tucker is a freelance journalist and author who writes mostly about pop culture and entertainment, most recently as a staff features writer at the New York Post. He has written hundreds of magazine and newspaper articles for everyone from Esquire and USA Today to O, The Oprah Magazine.