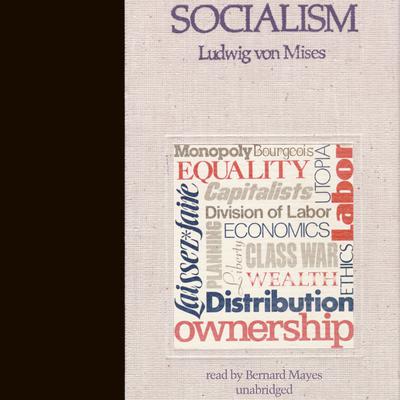 Socialism: An Economic and Sociological Analysis

By Ludwig von Mises
Foreword by Friedrich A. Hayek
Read by Bernard Mayes

Published in 1922 during those dark and dreary years of socialism's near-complete triumph, Socialism stunned the socialist world. Mises has given us a profoundly important treatise that assaults socialism in all its guises, a work that discusses every major aspect of socialism and leaves no stone unturned. A few of the numerous topics discussed include the success of socialist ideas; life under socialism: art and literature, science and journalism; economic calculation under socialism; the ideal of equality; and Marx's theory of monopolies.

With this monumental work, Mises laid the foundations for free society. Socialism has influenced scores of influential thinkers, including Friedrich Hayek, Ayn Rand, and Milton Friedman. It is read over and over again today, all over the world, inspiring throngs of new defenders of freedom.

“This book must rank as the most devastating analysis of socialism yet penned…An economic classic in our time.” —Henry Hazlitt

Ludwig von Mises (1881–1973) earned his doctorate in law and economics from the University of Vienna in 1906. In 1926, Mises founded the Austrian Institute for Business Cycle Research. From 1909 to 1934, he was an economist for the Vienna Chamber of Commerce. Before the Anschluss, in 1934 Mises left for Geneva, where he was a professor at the Graduate Institute of International Studies until 1940, when he emigrated to New York City. From 1948 to 1969, he was a visiting professor at New York University.