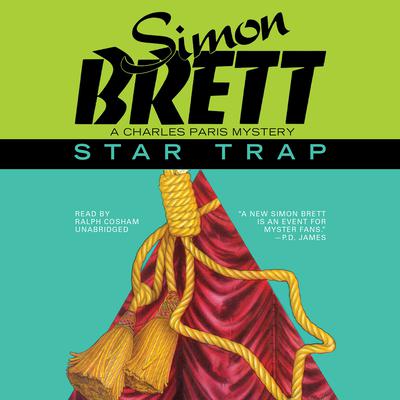 Charles Paris has landed a role in a lavish West-End musical. The star, one of England’s most popuar comedians, is adored by the public but despised in the business. He also seems to be behind some strange happenings backstage, including the rehearsal pianist being shot in the hand and an actor falling and breaking his leg. Why would the star want to sabotage his own show?

The playwright wants to strangle him. The leading lady longs to stab him in the back. The young Lothario looks at him with deadly rage. And unless Charles turns the spotlight on the real behind-the-scenes saboteur before opening night, murder will take top billing.

“[Cosham] reads Brett’s work with pleasant English charm in a staccato rhythm reminiscent of Cary Grant.”  —Today’s Librarian
“[Ralph Cosham] does a great job. Highly recommended.” —Library Journal
“Adeptly narrated by [Ralph Cosham], this short mystery moves nimbly. [Cosham’s] deep voice maneuvers characters deftly and allows for individuation of the dramatic lead, Christopher Milton; his leading lady; and others behind the set who may be suspects.” —AudioFile
“A new Simon Brett is an event for mystery fans.” —P. D. James

Simon Brett is the creator of four series of detective novels, the Charles Paris, Mrs Pargeter, Fethering, and Blotto & Twinks series. His 1984 stand-alone novel A Shock to the System was adapted as a film starring Michael Caine. He was awarded an OBE in 2016 for his services to literature and was elected a Fellow of the Royal Society of Literature. Before turning to writing full time, he worked with BBC radio and London Weekend Television Other radio work includes several one-off plays for Radio 4 and a number of episodes of the Baldi detective series. A former president of Britain’s Crime Writers Association, he is president of the Detection Club, as well as being involved with various writers’ organizations.