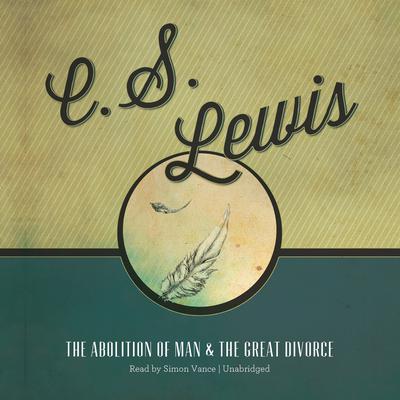 The Abolition of Man and The Great Divorce

Here are two classics of moral philosophy from one of the most revered Christian voices of our time.

In The Abolition of Man, C. S. Lewis reflects on society and nature and the challenges of how best to educate our children. He describes what public education should be and how far from this standard modern education has fallen. Lewis eloquently argues that, as a society, we need to underpin reading and writing lessons with moral education.

In The Great Divorce, Lewis presents his vision of the afterworld. A fictional narrator boards a bus on a drizzly English afternoon and embarks on an incredible voyage through Heaven and Hell, where he meets a host of supernatural beings and comes to some significant realizations about the nature of good and evil.

“Lewis, perhaps more than any other twentieth-century writer, forced those who listened to him and read his works to come to terms with their own philosophical presuppositions.” —Los Angeles Times
“Lewis has a genius for describing the intricacies of vanity and self-deception, and...[The Great Divorce]...is tremendously persistent in forcing its reader to consider the ultimate consequences of everyday pettiness.” —Michael Joseph Gross, author and journalist
“These two short works by Lewis are a fine introduction to his eloquent writing, as well as his thought...[Simon Vance’s] disciplined and well-modulated voice has an appealingly confident quality. Whether or not one agrees with Lewis's arguments, it is a joy to hear writing so eloquent.” —AudioFile