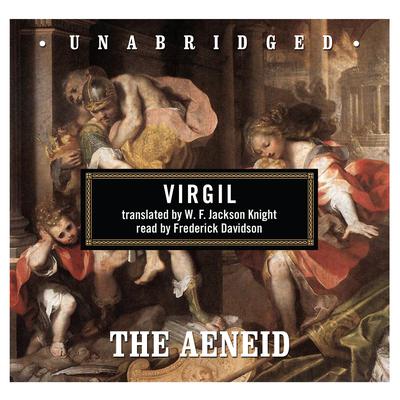 This enduring masterpiece tells of the epic quest of Aenas, who flees the ashes of Troy to found a new civilization: Rome. A unique hero, Aenas struggles and fights not for personal gain but for a civilization that will exist in the far future. Caught between passion and fate, his vision would change the course of the Western world.

Virgil, Rome's greatest poet, turned a mythical legend into a national epic that would survive Rome's collapse to become the most influential book Rome contributes to Western culture.

“The founding of Rome and the maturation of a hero who has greatness thrust upon him are the subjects of Virgil’s first-century (B.C.) epic.” —Kirkus Reviews
“A sweeping epic filled with adventure and mythology, heroes and gods. There is a lot of material here for students of history, Greek and Roman mythology, ancient literature…[Davidson’s] diction and pacing are quite good.”  —Kliatt

Publius Vergilius Maro (70 BC–19 BC), usually called Virgil or Vergil in English, was a Roman poet of the Augustan period. He is known for three major works of Latin literature, the Eclogues (or Bucolics), the Georgics, and the epic Aeneid. He is traditionally ranked as one of Rome’s greatest poets. His Aeneid has been considered the national epic of ancient Rome from the time of its composition to the present day. He was born in a small village near Mantua in northern Italy and attended school at Cremona, Milan, and Rome, where he studied mathematics, medicine, and rhetoric. He devoted his life, from 30 to 19 BC, to the composition of The Aeneid, the national epic of Rome.