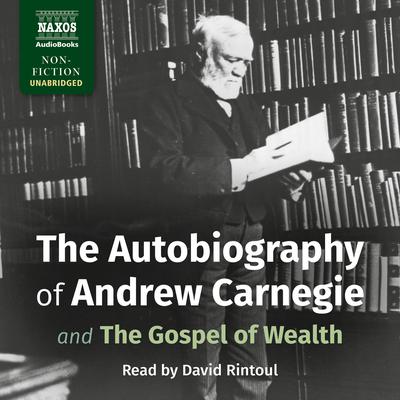 The Autobiography of Andrew Carnegie: And the Gospel of Wealth

By Andrew Carnegie
Read by David Rintoul , with Lucy Scott

A leading industrialist of the 19th and 20th centuries, Andrew Carnegie was one of America’s most successful and generous businessmen. The Autobiography tells of his rise to power, from humble beginnings in Scotland to controlling the biggest steel empire in the history of the United States. Carnegie lays down the blueprint for success, with an abundance of inspiring life lessons, while also giving unique first-hand impressions of burgeoning 19th-century America and some of the most prominent people of the age, including Abraham Lincoln and Mark Twain. In The Gospel of Wealth he writes about his philanthropy and urges the rich to use their wealth responsibly, revealing the reasons that famously led him to donate over 350 million dollars during his lifetime.

Andrew Carnegie was born in 1835 in Scotland. He immigrated to the United States and by 1889 he owned Carnegie Steel Corporation, the largest of its kind in the world. In 1901 he sold his business and dedicated his time to expanding his philanthropic work, including the establishment of Carnegie-Mellon University in 1904.