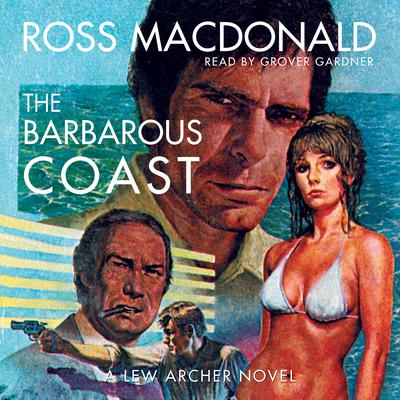 Ross Macdonald is one of the “Big Three” in American hard-boiled detective fiction, along with Chandler and Hammett. In The Barbarous Coast, tough, thoughtful private eye Lew Archer pursues a girl who jackknifed too suddenly from high diving to high living. Archer’s investigation leads him to an ex-fighter with an unexplained movie contract, a big-time gambler who died by his own knife, and finally, to an answer he would rather not have known.

“Beset by dirty cops, a bumptious boxer turned silver screen pretty boy, and a Hollywood mogul with a dark past, Archer discovers the secret of a grisly murder that just won’t stay hidden.” —Amazon.com
“[Grover Gardner] reads with great skill, shading primarily by accent rather than by tone or volume. A prissy character sounds prissy, a Mexican-American has the faintest of Spanish accents, and the first-person protagonist sounds a little weary, a little cynical, a little lonely. This is an excellent presentation of an excellent crime novel.” —AudioFile
“[Gardner] tackles Macdonald’s series detective hero Lew Archer, many subtle ethnic accents, and women’s voices with awesome professionalism.” — Kliatt (audio review)
“Archer solves crimes with the instincts of a psychologist and the conscience of a priest, and the mid-twentieth-century Southern California setting is a wonderful ride in the Wayback Machine.” —Los Angeles Times, praise for the series
“Lew Archer has evidenced his differences from the usual run of fictional private eyes. He is not obsessed with bed, bottle and boodle; he doesn’t indulge in unnecessary violence, in action or in language; he is a sensitive and thoughtful man, tough enough to survive in a dangerous profession but moved rather to pity than cynicism by the way the world goes.”  —New York Herald Tribune, praise for the series