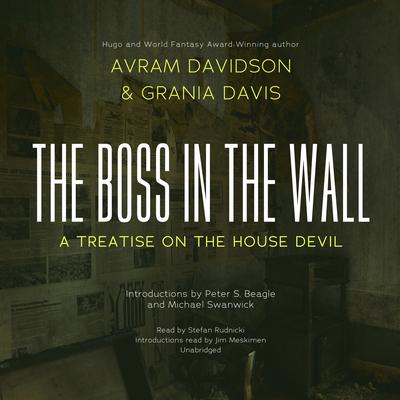 The Boss in the Wall: A Treatise on the House Devil

Professor Vlad Smith is on a terrifying quest, one that will take him from the halls of our most hallowed institutions to the most run-down of old houses in blighted neighborhoods. A mysterious committee, shredded yellowed newspapers, a daguerrotype of a Confederate soldier, a headless corpse and a corpseless head … These are the clues which Smith must piece together to save his sanity and his daughter, and uncover the terrible secret of the Boss in the Wall.

Avram Davidson (1923–1993) was author of nineteen published novels and more than two hundred short stories and essays collected in more than a dozen books. Davidson won the Hugo Award in science fiction, the Queen’s Award and Edgar Award in the mystery genre, and the World Fantasy Award (three times).

Grania Davis (1943–2017), an author and editor, wrote The Rainbow Annals, The Great Perpendicular Path, and Moonbird. She was married to author Avram Davidson from 1962 to 1964 and collaborated with him on several works. After Davidson’s death in 1993, Davis coedited collections of his stories, including The Avram Davidson Treasury (with Robert Silverberg), which won the 1999 Locus Award for best collection.