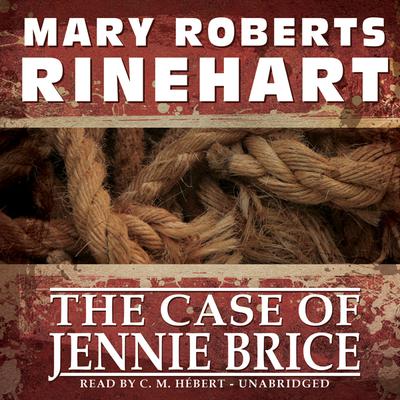 The Case of Jennie Brice

The blood-stained rope and towel, the stray slipper, the broken knife—and the disappearance of the lovely Jennie Brice—were enough to convince Mrs. Pitman that murder had been commited in her boardinghouse. The police, however, were another matter. Without a tangible body, there could be no official murder charge.

Mrs. Pitman ran a respectable establishment and was not about to harbor a killer on the premises. If the police couldn't see what was in front of their noses, then she would just have to take matters into her own hands. As the landlady, after all, she had the perfect excuse to do a little judicious snooping.

“A money’s worth of chills and thrills.” —Kirkus Reviews
“Sometimes you have the good fortune to come upon a novel that’s like a suit tailored in Bond Street or an understated little black frock by a top designer, so exquisitely put together that you don’t quite realize you’re seeing something extra special until you take a second look. Even if the flood scenes were its only attraction, Jennie Brice would be well worth a second look.” —Charlotte MacLeod in Had She But Known: A Biography of Mary Roberts Rinehart

Mary Roberts Rinehart (1876–1958) was a novelist and playwright best known for her mystery stories, which combined humor with ingenuity. The success of her novels The Circular Staircase and The Man in Lower Ten established her reputation as an important American mystery writer. At one time she was the highest paid writer in America. In addition to mysteries, she wrote comic tales, plays, romances, and travel books, some of which reflected her experiences as a correspondent during World War I. One critic called her autobiography, My Story, her finest book.