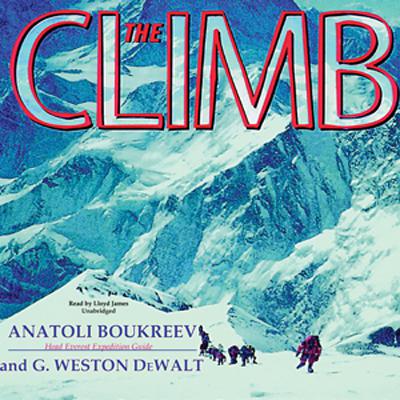 The Climb: Tragic Ambitions on Everest

This is the gripping true account of the worst disaster in the history of Mt. Everest. On May 10, 1996, two commercial expeditions headed by experienced leaders attempted to climb the highest mountain in the world—but things went terribly wrong. Crowded conditions on the mountain, miscommunications, unexplainable delays, poor leadership, bad decisions, and a blinding storm conspired to kill. Twenty-three men and women, disoriented and out of oxygen, struggled to find their way down the side of the mountain. In the dark, battered by snow and driven by hurricane-force winds, some of the climbers became hopelessly lost and resigned themselves to death. But head climbing guide Anatoli Boukreev refused to give up hope. Climbing blind in the maw of a life-threatening storm, Boukreev brought climbers back from the edge of certain death.

This is an amazing true story of an expedition fated for disaster, of the blind ambition that drives people to attempt such dangerous ventures, and of a modern-day hero, who risked his own life to save others.

“Powerful...a breath of risk, sometimes bitter clarity...Boukreev did the one thing that denies the void. He took action. He chose danger, and he saved lives.” —New York Times Book Review
“One of the most amazing rescues in mountaineering history, performed single-handedly a few hours after climbing Everest without oxygen by a man some describe as the Tiger Woods of Himalayan climbing.” —Wall Street Journal
“Boukreev acted with extraordinary heroism...[In The Climb] first-person anecdotes, plus excerpts from taped base-camp interviews, are skillfully fleshed out by coauthor G. Weston DeWalt.” —Rock & Ice Magazine
“James engages vocal emotion to capture the terror of unstable crevasses, relentless wind, frostbite and oxygen-starved struggles to walk.” —AudioFile
“Fast-paced and easy to read, Boukreev’s story of adventure and survival will remain in the reader’s memory long after the book is finished.” —Library Journal

Anatoli Boukreev (1958–1997) was one of the world’s foremost high-altitude mountaineers. Twenty-one times he went to the summit of the world’s highest mountains. For his heroic actions on Mount Everest in May 1996, he was awarded the American Alpine Club’s highest honor, the David A. Sowles Memorial Award. He died in an avalanche while climbing in Nepal on December 25, 1997.

G. Weston DeWalt is a writer and a documentary filmmaker whose work has been aired on PBS. He divides his time between Santa Fe, New Mexico, and London.