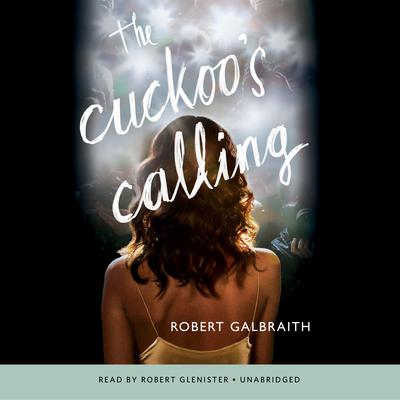 An iBooks bestseller in Audiobooks

One of Kirkus Reviews’ Best Books of 2013

Published under a pseudonym, J. K. Rowling's brilliant debut mystery introduces Detective Cormoran Strike as he investigates a supermodel's suicide in "one of the best books of the year" (USA Today).

After losing his leg to a land mine in Afghanistan, Cormoran Strike is barely scraping by as a private investigator. Strike is down to one client, creditors are calling, and after a breakup with his longtime girlfriend, he's living in his office.

Then John Bristow walks through his door with a shocking story: His sister, the legendary supermodel Lula Landry -- known to her friends as the Cuckoo -- famously fell to her death a few months earlier. The police ruled it a suicide, but John refuses to believe that. The case plunges Strike into the world of multimillionaire beauties, rock-star boyfriends, and desperate designers, and it introduces him to every variety of pleasure, enticement, seduction, and delusion known to man.

Robert Galbraith has written a highly entertaining book... Even better, he has introduced an appealing protagonist in Strike, who's sure to be the star of many sequels to come.... its narrative moves forward with propulsive suspense. More important, Strike and his now-permanent assistant, Robin (playing Nora to his Nick, Salander to his Blomkvist), have become a team - a team whose further adventures the reader cannot help eagerly awaiting. —Michiko Kakutani, The New York Times
One of the books of the year. —USA Today
“The private eye novel is not dead. It was merely waiting for Robert Galbraith to give it a firm squeeze…I haven’t had this much fun with a detective novel in years.” —Duane Swierczynski, New York Times bestselling author
Rowling switches genres seamlessly...a gritty, absorbing tale. —People (3.5/4 stars)
[Rowling's] literary gift is on display in this work. She crafts an entertaining story [and] comes up with an ending that I'll admit I was surprised by. . . . A fun read, with a main character you can care about and one you'll want to see again in other adventures. —Washington Post
An extravagant, alien, fascinating world for its characters to explore...great pleasures. —Slate
“Rowling switches genres seamlessly...A gritty, absorbing tale.” —People
“A highly entertaining book…its narrative moves forward with propulsive suspense.” —New York Times
“Narrator Robert Glenister is the star…Glenister infuses gruff charm and a poignant edginess into Rowling’s wonderfully original detective hero, Cormoran Strike. Glenister’s character accents are terrific, and he’s a genius with women’s voices, which he softens without caricature. Glenister is just right in this noir-ish mystery with a hard-boiled softie at its center. Don’t miss it. Winner of an AudioFile Earphones Award.” —AudioFile
“Thoroughly enjoying…The book’s real magic is in Rowling’s distinctive descriptive prose.” —Milwaukee Journal Sentinel
“Combines a complex and compelling sleuth and an equally well-formed and unlikely assistant with a baffling crime…[A] stellar debut.” —Publishers Weekly (starred review)
“Plenty of twists…Galbraith’s take on contemporary celebrity obsession makes for a grand beach read.” —Library Journal (starred review)
“A quick, fun read. Rowling delivers a set of characters every bit as durable as her Potter people, and a story that, though no more complex than an Inspector Lewis episode, works well on every level.” —Kirkus Reviews (starred review)
“Instantly absorbing, featuring a detective facing crumbling circumstances with resolve instead of clichéd self-destruction and a lovable sidekick with contagious enthusiasm for detection.” —Booklist
“Robert Galbraith’s debut is as hardbitten and hard-driving as its battered hero. The Cuckoo’s Calling scales the glittering heights of society even as it plumbs the dark depths of the human heart. A riveting read from an author to watch.” —Mike Cooper, Shamus Award–winning author
“Cormoran Strike is an amazing creation and I can’t wait for his next outing. Strike is so instantly compelling that it’s hard to believe this is a debut novel. I hope there are plenty more Cormoran Strike adventures to come. A beautifully written debut novel introducing one of the most unique and compelling detectives I’ve come across in years.” —Mark Billingham, author of The Demands
“A remarkably assured debut. Robert Galbraith’s portrayal of celebrity-obsessed modern London is at once beautifully written and utterly engrossing, his characters so real you could eat dinner with them, his ever-coiling plot guaranteed to keep you up past your bedtime. I couldn’t put it down.” —Owen Laukkanen, author of The Professionals

Robert Galbraith is a pseudonym for J. K. Rowling, bestselling author of the Harry Potter series and The Casual Vacancy, as well as five novels in the Cormoran Strike thriller series. The series has been adapted for television, produced by Brontë Film and Television.