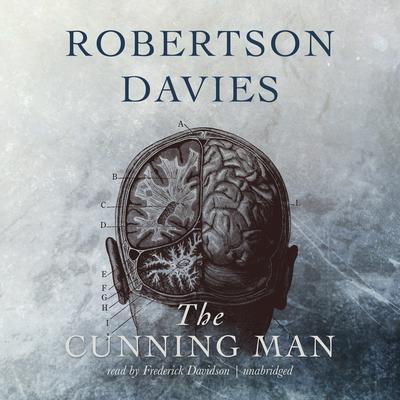 From an early age, Jonathan Hullah developed "a high degree of cunning" in concealing what his true nature might be. He kept himself on the outside, watching and noticing, most often in the company of those who bore watching.

As the Cunning Man takes us through his own long and ardent life, chronicling his varied adventures in the worlds of theatre, art, and music, in the Canadian Army during World War II, and in the doctor's consulting room, his preoccupation is not with sorrow but with the comedic canvas of life.

Just as Dr. Hullah practices a type of psychosomatic medicine "by which I attempt to bring about changes in the disease syndromes through language," so does Robertson Davies intertwine language and story, as perhaps never before, to offer us profound truths about being human.

“Admirers of the late actor James Mason will delight in the narrative gifts of Frederick Davidson, who also projects a delicious irony in the instrument of his voice. And what better material to give expression to that talent than Robertson Davies', Canada's most prodigious ironist…Davidson's reading never flags. He remains buoyant and wry throughout, a witty companion to have on a long journey.” —AudioFile
“A delight.” —Boston Sunday Globe
“A novel in which Davies’ clear-sighted humanism, irony, and grasp of character are on vivid display…Davies’ command of both his material and his elegant first-person narration is absolute. He achieves a remarkable sense of uncloying elegy in his vision of a group of people who are far more complicated than they appear, yet always utterly believable. To call a book the work of an infinitely civilized mind might seem starchy; to add that it is also wonderfully funny, poignant, and never less than totally engrossing should redress the balance.” —Publishers Weekly (starred review)
“It is always a pleasure to read works that manage to be both entertaining and intelligent…While the issues addressed are those that have long preoccupied Davies—the nature of friendship, religion, faith, and artistic life—the approach is anything but pompous and dry. Davies' characterizations are rich (and just a bit quirky) and his commentary filled with humor. One of those rare novels that can be wholeheartedly recommended for libraries of every type and size, including high schools.” —Library Journal
“Popular Canadian author Davies has written a sort of metaphysical mystery story…compelling.” —Booklist
“Davies deftly combines metaphysics, magic, and modern medicine to tell a contemporary story with ancient roots…Set in that urbane part of Toronto where art, academe, and old money comfortably mingle, the novel also explores familiar Davies themes of friendship, faith, and art…A splendid intellectual romp as well as an absorbingly literate novel. Davies at his best.” —Kirkus Reviews