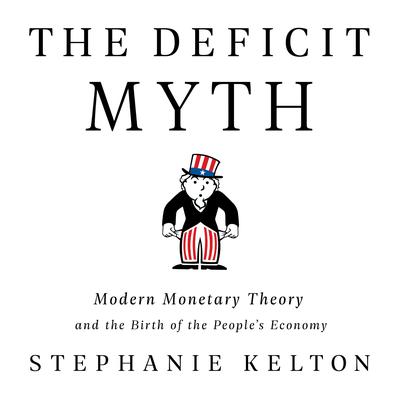 The Deficit Myth: Modern Monetary Theory and the Birth of the People’s Economy

Longlisted for the Porchlight Best Business Book of the Year

The leading thinker and most visible public advocate of modern monetary theory - the freshest and most important idea about economics in decades - delivers a radically different, bold, new understanding for how to build a just and prosperous society.

Any ambitious proposal - ranging from fixing crumbling infrastructure to Medicare for all or preventing the coming climate apocalypse - inevitably sparks questions: how can we afford it? How can we pay for it? Stephanie Kelton points out how misguided those questions really are by using the bold ideas of modern monetary theory (MMT), a fundamentally different approach to using our resources to maximize our potential as a society.

Through illuminating insights about government debt, deficits, inflation, taxes, the financial system, and financial constraints on the federal budget, Kelton dramatically changes our understanding of how to best deal with important issues ranging from poverty and inequality to creating jobs and building infrastructure. Rather than asking the self-defeating question of how to pay for the crucial improvements our society needs, Kelton guides us to ask: which deficits actually matter? What is the best way to balance the risk of inflation against the benefits of a society that is more broadly prosperous, safer, cleaner, and secure?

With its important new ways of understanding money, taxes, and the critical role of deficit spending, MMT busts myths that prevent us from taking action because we can't get beyond the question of how to pay for it.

“Kelton is an indispensable source of moral clarity…The truths that she teaches about money, debt, and deficits give us the tools we desperately need to build a safe future for all.” —Naomi Klein, #1 New York Times bestselling author
“A robust, well-reasoned, and highly readable walk through many common misunderstandings. A ‘must-read’ for anyone who wants to understand how government financing really works and how it interplays with economic policy.” —Frank Newman, former deputy secretary of the Treasury
"The Deficit Myth is simply the most important book I’ve ever read. Stephanie Kelton carefully articulates a message that obliterates economic orthodoxy about public finance…Kelton’s work is on a par with the genius of DaVinci and Copernicus, heretics who proved that Earth revolves around the sun.” —David Cay Johnston, Pulitzer Prize–winning author

Stephanie Kelton is an author and professor of economics and public policy at the State University of New York at Stony Brook and Bloomberg contributing columnist, has been called a “prophetic economist” and a “Rock Star” of progressive economics. Her op-eds have appeared in the New York Times, Washington Post, Los Angeles Times, and Bloomberg News. She is the founder of the top-rated economic blog New Economic Perspectives and a member of the TopWonks network of the nation’s best thinkers. In 2016, Politico recognized her as one of the fifty people across the country most influencing the political debate. She was chief economist on the US Senate Budget Committee (minority staff) and an advisor to the Bernie2016 presidential campaign. She is a regular commentator on national radio and television and speaks across the world at large gatherings of people interested in global finance, political economy and public policy.