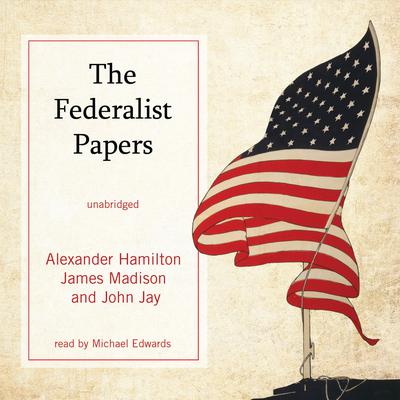 Approved by the Constitutional Convention on September 17, 1787, the US Constitution was to become law only if ratified by nine of the thirteen states then comprising the United States. The eighty-five letters in support of the Constitution collected here have become recognized as the most important political science work ever written in the United States. Written primarily by Hamilton, assisted by Madison and Jay, these essays are considered to be the foremost commentary on the US Constitution. Today lawyers, historians, and Supreme Court Judges, along with countless others, carefully comb these letters looking for key insights ranging from their analysis of the power of congress to their arguments on behalf of judicial review. From what we can determine, ours is the only unabridged recording to date.

“The Federalist Papers stand as key documents in the founding of the United States.” —Amazon.com editorial review
“In 1787 and 1788, these articles argued, with great clarity and prescience, for the ratification of the Constitution and for a strong federal government.” —Audiofile

Alexander Hamilton (1757–1804) was a Founding Father, soldier, economist, political philosopher, one of America’s first constitutional lawyers, and the first United States Secretary of the Treasury. After serving in the Revolutionary War, he was elected to the Continental Congress, ultimately resigning to establish the Bank of New York. Hamilton was a main contributor to the influential Federalist Papers, a collection of essays written by himself, John Jay, and James Madison. He was mortally wounded in a famous duel with presidential candidate Aaron Burr.

John Jay (1745–1829) was a conservative lawyer who became a leading patriot. He served as minister to Spain, became the first chief justice of the United States Supreme Court, and negotiated the treaty of 1795 between the United States and Britain. His contributions to The Federalist Papers concern foreign affairs.

James Madison (1751–1836) was the fourth President of the United States and is known as the “father of the Constitution.” He was secretary of state under Jefferson; his main achievement in this role was the purchase of Louisiana from the French. He was elected president in 1809 and again in 1812. During his terms in office he worked to abolish slavery, to disestablish the Church, and to seek peace.