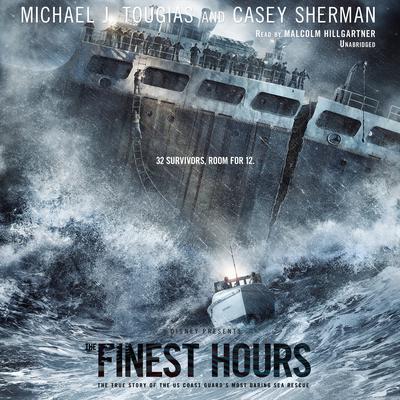 The Finest Hours: The True Story of the US Coast Guard’s Most Daring Sea Rescue

In the winter of 1952, New England was battered by the most brutal nor’easter in years. As the weather wreaked havoc on land, the freezing Atlantic became a wind-whipped zone of peril, setting the stage for one of the most heroic rescue stories ever lived.

On February 18, while the storm raged, two oil tankers, the Pendleton and the Fort Mercer, were in the same horrifying predicament. Built with “dirty steel,” and not prepared to withstand such ferocious seas, both tankers split in two, leaving the dozens of men on board utterly at the Atlantic’s mercy. The Finest Hours is the gripping, true story of the valiant attempt to rescue the souls huddling inside the broken halves of the two ships.

The spellbinding tale is overflowing with breathtaking scenes, as boats capsize, bows and sterns crash into one another, and men hurl themselves into the raging sea in a terrifying battle for survival.

Not all of the eighty-four men caught at sea in the midst of that brutal storm survived, but considering the odds, it’s a miracle—and a testament to their bravery—that any at all came home to tell their tales.

“In February of 1952, eighty-four men were in danger of drowning off the coast of Cape Cod when a ferocious nor’easter split their ships in two. The Finest Hours recounts the incredible heroism of the Coast Guard, who risked their lives to save others. A gripping read.” —James Bradley, New York Times bestselling author
“Look no further for the real-life adventure of the year. The Finest Hours is a rousing page-turner, a fascinating history, and an inspiring ode to the courage and professionalism of men who face bitter winds and black mountainous seas…all to do a dangerous job. Put it on the shelf next to The Perfect Storm. That’s where it belongs!” —William Martin, New York Times bestselling author
“The Finest Hours is a touching account, a sensitive rendering of what might be called four indescribably chaotic conditions…Tougias and Sherman never sensationalize, never go beyond the facts, and yet capture all the pain, physical and emotional, of the survivors and their families.” —Providence Journal
“This book captures the wit, grit, and sacrifice of Coasties and their boats.” —Minneapolis Star Tribune
“Nearly fifty-seven years later, it’s a breathtaking story that still defies the imagination.” —Cape Cod Chronicle
“It’s good to know that real heroes exist…Incredible.” —Concord Monitor
“Tougias and Sherman have told a mesmerizing story about Coast Guardsmen under the stress of extreme conditions and the self-imposed pressure to perform. The events they describe so vividly occurred in 1952. As extraordinary as the collective performance by the boat crews, cutter crews, and aircraft crews were that night, the real miracle is that such performances are timeless.” —James Loy, former commandant of the United States Coast Guard
Gripping…Tougias and Sherman ably narrate the desperate struggles of crew members on both the wrecks and the rescue boats…will make readers appreciate the bravery of the men who put their lives on the line..…action-packed.” —Publishers Weekly
“Tougias and Sherman reach their peak of tension in the sink-or-swim moments when mariners abandoned ship and chanced their lives on their rescuers’ skill and bravery…Excellent.” —Booklist
“A gripping tale of Coast Guard heroism…[An] action-packed account of rescue at sea.”  —Kirkus Reviews

Michael J. Tougias is a bestselling author and coauthor of numerous books for adults, including There’s a Porcupine in My Outhouse, which won the Independent Publishers Award for Best Nature Book of the Year, and The Finest Hours, the basis for a Disney movie. He has also written several books for children as part of his True Rescue series.

Casey Sherman is considered one of America’s preeminent true-crime authors and investigative journalists. His books include The Ice Bucket Challenge; The Finest Hours, coauthored with Michael J. Tougias and made into a major motion picture by Walt Disney Pictures; Animal: The Bloody Rise and Fall of the Mob’s Most Feared Assassin; Search for the Strangler; and Bad Blood. He has been a finalist for the Massachusetts Book of the Year honors and the New Hampshire Literary Awards nonfiction prize. He has been a featured guest on NBC’s Today and Dateline; CBS’s The Early Show, 48 Hours, and the CBS Evening News; ABC World News Tonight, CNN, Fox News, MSNBC, Discovery, The History Channel, A&E, The Travel Channel, and The View.