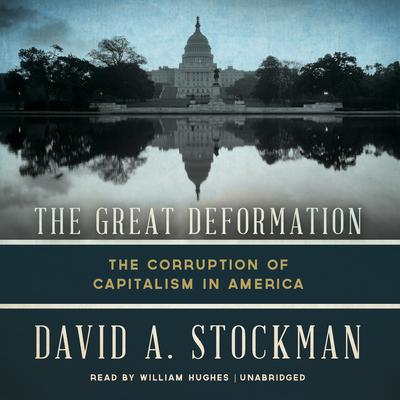 The Great Deformation: The Corruption of Capitalism in America

By David A. Stockman
Read by William Hughes

A coruscating, brilliantly insightful exegesis of where capitalism went wrong, how it was corrupted, and how it might be restored, by outspoken former Reagan budget director and bestselling author David Stockman

David Stockman was the architect of the Reagan Revolution meant to restore sound money principles to the United States government. It failed, derailed by politics, special interests, welfare, and warfare. In The Great Deformation, Stockman describes how the working of free markets and democracy has long been under threat in America and provides a surprising nonpartisan catalog of the corrupters and defenders. His analysis overturns the assumptions of Keynesians and monetarists alike, showing how both liberal and neoconservative interference in markets has proved damaging and often dangerous. Over time, crony capitalism has made fools of us all, transforming Republican treasury secretaries into big-government interventionists and populist Democrat presidents into industry-wrecking internationalists. Today's national debt stands at nearly $16 trillion. Divided equally among taxpayers, each of us is $52,000 in debt. This book explains how we got here—and why this warped crony capitalism has betrayed so many of our hopes and dreams.

“Even as he indulges his spleen, Stockman produces a persuasive and deeply relevant indictment of a system dangerously akilter…What Stockman has written is a book that makes clear we are that future generation of the past, inheritors of all the wishful thinking, simple illogic, and flawed compromises that produced the near-term benefits our parents and grandparents worried about but ultimately wanted. And now it’s payback time.” —Washington Post
“Stockman performs a real service when he debunks the myths that have been associated with Reagan’s conservatism and promotes Eisenhower’s fiscal and military conservatism…Stockman forcefully conveys enormous amounts of knowledge.” —Kirkus Reviews

David Stockman was elected as a Michigan congressman in 1976 and joined the Reagan White House in 1981. Serving as budget director, he was one of the key architects of the Reagan Revolution plan to reduce taxes, cut spending, and shrink the role of government. He joined Salomon Brothers in 1985 and later became one of the early partners of the Blackstone Group. During nearly two decades at Blackstone and at a firm he founded, Heartland Industrial Partners, Stockman was a private equity investor. Born in Fort Hood, Texas, he attended Michigan State University and Harvard Divinity School and then went to Washington as a congressional aide in 1970.