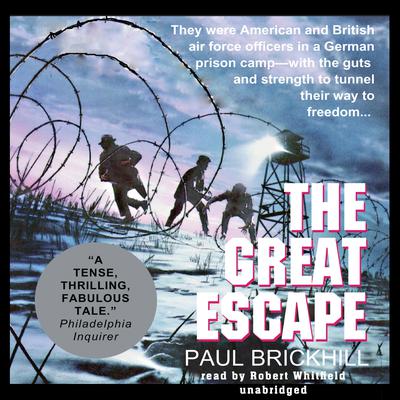 An Audible.com bestseller in December 2015

It was a split-second operation as delicate and as deadly as a time bomb. It demanded the concentrated devotion and vigilance of more than six hundred American and British air force officers, every single one of them, every minute, every hour, every day, and every night for more than a year. With only their bare hands and the crudest of homemade tools, they sank shafts, built underground railroads, forged passports, drew maps, faked weapons, and tailored German uniforms and civilian clothes. They developed a fantastic security system to protect themselves from the German “ferrets” who prowled the compounds with nerve-racking tenacity and suspicion. And against all odds, they pulled off a daring mass escape from a German POW camp.

“Absorbing…spine-tingling…puts the average war book so far in the shadow it’s not even funny.” —Dallas Times-Herald
“One of the great true stories of the war, and one of the greatest escape narratives of all time.” —San Francisco Chronicle
“Robert Whitfield reads this suspenseful dramatic story in a calm, thoughtful manner. His consistent pace and matter-of-fact delivery mimic the methodical struggle of the POWs to regain their freedom and escape starvation. The timing, cadence, vocal quality, and even melody of Whitfield’s reading add to the suspense. Listeners will understand more fully the ordeal of a POW.” —AudioFile

Paul Brickhill (1916–1991) was an Australian journalist and writer whose World War II books were turned into popular movies. He was directly involved with the escape from Stalag Luft III, although he was one of the prisoners left behind. After the war, he wrote the first major account of the escape in The Great Escape (1950), bringing the incident to a wide public attention. He went on to write two other bestselling war books, The Dam Busters and Reach for the Sky. All three books were made into feature films.