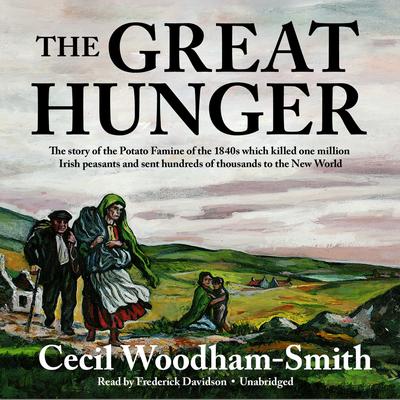 The Great Hungeris the definitive account of one of the worst disasters in world history: the Irish Potato Famine of the 1840s. Within five years, one million people died of starvation. Emigrants by the hundreds of thousands sailed for America and Canada in small, ill-equipped, dangerously unsanitary ships. Some ships never arrived; those that did carried passengers already infected with and often dying of typhus.

The Irish who managed to reach the United States alive had little or no money and were often too weak to work. They crowded into dirty cellars, begged, and took whatever employment they could get. Epidemics, riots, and chaos followed in their wake.

The Great Hungeris a heartbreaking story of suffering, insensitivity, and blundering stupidity; yet it is also an epic tale of courage, dignity, and—despite all odds—a hardly supportable optimism.

“Mrs. Woodham-Smith has made an individual contribution to Irish history. Her thoroughness in research, compassionate fair-mindedness, and gift of narrative are all again in evidence.” —Times (London)
“A moving and terrible book. It combines great literary power with great learning. It explains much in modern Ireland—and in modern America.” —D.W. Brogan
“A masterpiece of the historian’s art.” —Robert Kee
“Her just and penetrating mind, her lucid and easy style, and her assured command of the sources have produced one of the great works not only of Irish nineteenth-century history, but of nineteenth-century history in general.” —Conor Cruise O’Brien

Cecil Blanche Woodam-Smith (1896-1977) was a British historian and biographer. She wrote four popular history books, each dealing with a different aspect of the Victorian era.