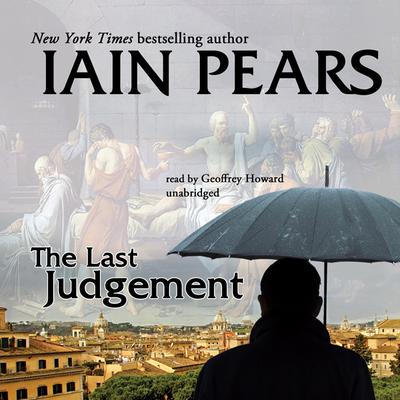 Paris can do strange things to a man's mind—like make him agree to an apparently harmless favor of escorting a picture to Rome. It seems routine work, and art dealer Jonathan Argyll gets to meet his girlfriend, Flavia, who works for Rome's Art Theft Squad.

"The Death of Socrates" is a particularly nondescript piece, so Jonathan can sympathize when its recipient refuses to accept delivery. But in an unusual twist, the same man is found dead a few hours later. Surely the painting wasn't that bad? Now caught up in a murder investigation, Jonathan recalls an attempt to steal the artwork while he was at the train station. Could this be the killer? What is so special about this painting? The bodies start piling up and Jonathan must uncover the dark wartime secret at the heart of the mystery—before someone puts him out of the picture for good.

With customary wit and panache, Jonathan and Flavia embark on a breathless chase to capture a killer who has been refining his own particular art for many years.

“The latest (mis)adventure of art historian Jonathan Argyll delivers its plot twists at a rapid clip right up to the closing pages…Pears keeps his readers well occupied.” —Publishers Weekly
“Pears weaves a tale as tangled as spaghetti. What triggered the murders? Who is telling the truth? [Cosham’s] strong voice and characterizations neatly tie together the deception, beautiful art and history.” —AudioFile
“A sophisticated, adventurous, and gripping story that is sure to hold wide appeal. In the odd moment when Jonathan and Flavia aren’t detecting, they carry on a delightful courtship that provides nearly as much enjoyment as the surprising plot.” —Booklist

Iain Pears is a journalist and art historian with a doctorate in art history from Oxford. He is the author of numerous works, including seven detective novels in the Jonathan Argyll series, a book of art history, and the New York Times bestselling historical novel An Instance of the Fingerpost. He lives in Oxford, England.