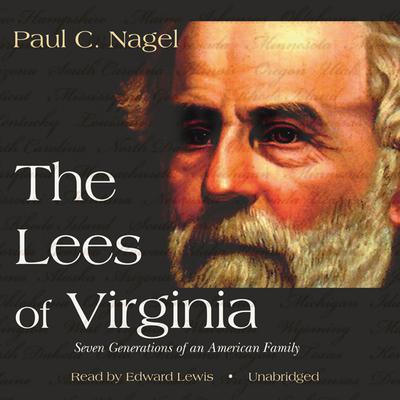 The Lees of Virginia: Seven Generations of an American Family

The descendants of Richard and Anne Lee, among the first families of Virginia, have occupied a preeminent place in American history. Two were signers of the Declaration of Independence, several others distinguished themselves during the Revolutionary War, and one, Robert E. Lee, remains the most widely known as a Civil War legend.

In The Lees of Virginia, Paul Nagel chronicles seven generations of Lees, covering over two hundred years of American history. We meet the dreamers and the nonconformists, the controversial and tempestuous personalities, the disgracers of the family name—and, of course, the family’s redeeming figure: Robert E. Lee, a brilliant military tactician whose ruling motto was self-denial and who saw God’s hand in all things. In these and numerous other portraits, Nagel discloses how, from 1640 to 1870, a family spirit united the Lees, making them a force in Virginian and American affairs.

“[A] splendidly written, poignant, well-researched portrait of a notable clan through approximately 230 years.” —Publishers Weekly
“Nagel’s research is impeccable, and the historical value great.” —AudioFile
“A well-researched, readable treatiseRecommended for history buffs and anyone interested in methods of genealogical research.” —Booklist
“[Lewis] handles the task with professional dispatch. His even-toned, unvoiced effort rings with authority and moves along at a brisk but comfortable pace.” —Kliatt
“Nagel examines this powerful, often troubled clan with the same searching, generous spirit he brought to the Adams family…A multigenerational saga as ambitious, [and] accomplished…as the American dynasty it chronicles.” —Kirkus Reviews

Paul C. Nagel  was a professor of history, a college dean, and a university vice president before devoting himself to writing. The most notable results of his writing career are his books about the John Adams family, Descent from Glory (1983) and The Adams Women (1987), and another about the family of Richard Henry Lee and Robert E. Lee, The Lees of Virginia (1990). He has been president of the Southern Historical Association and a trustee of the Colonial Williamsburg Foundation, and is a fellow of the Pilgrim Society, a fellow of the Society of American Historians, a cultural laureate of Virginia, and a contributing editor of American Heritage. He and his wife live in Minneapolis.