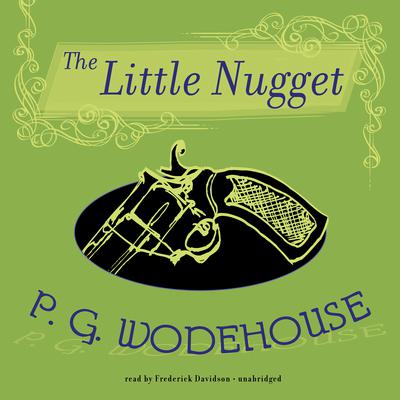 When the Little Nugget, alias of thirteen-year-old Ogden Ford, bulgy, rude, chain-smoking son of an American millionaire, arrives at Sanstead House School, the fun has just begun. Mr. Peter Burns, a none-too-dedicated schoolmaster engaged by snobbish Mr. Abney to educate his handpicked pupils, soon finds himself and his enraptured class at the mercy of an American gunman—and at the beginning of a series of truly mind-boggling adventures—in a delicious Wodehouse tale of suspense, excitement, and romance.

“Davidson nearly drawls as he moves from one situation to another, sharply distinguishing the male characters, from a pompous schoolmaster to the obnoxious nugget himself. His rendition of an American thug is particularly funny, Chicago and the Bronx combined. Great fun!” —AudioFile
“Wodehouse’s idyllic world can never stale. He will continue to release future generations from captivity that may be more irksome than our own. He has made a world for us to live in and delight in.” —Evelyn Waugh
“Pure word music.” —Douglas Adams