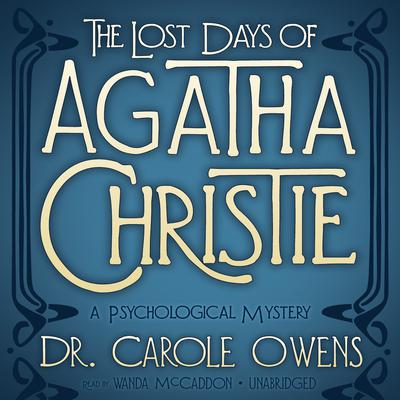 The Lost Days of Agatha Christie: A Psychological Mystery

There was only one mystery Agatha Christie could not solve: her own.

Dame Agatha Christie is best known for her detective novels and short stories. She is one of themost popular authors of all time, her novels having sold over four billion copies and having been translated into 103 languages.

On the evening of December 8, 1926, Agatha Christie disappeared from her home in Sunningdale, Berkshire, leaving only a note for her secretary indicating that she was going to Yorkshire. Despite a massive manhunt, she was not found for eleven days. On December 19, 1926, Agatha was identified as a guest at a hotel in Harrogate, Yorkshire, where she was registered as Mrs. Teresa Neele of Cape Town. Christie would give no account of her actions. Why did she disappear?

Seven decades after her disappearance, theNew York Timescalled Agatha Christie Harrogate's"most famous nonresident."The mystery of her unexplained disappearance has never ceased to fascinate Christie fans and time has not diminished their desire to find a solution. In this psychological novel, Dr. Carole Owens, a practicing psychotherapist, takes on Agatha Christie as a patient to diagnose her problem and at long last solve the mystery of Christie's lost days.

“I loved it…A solution to Agatha’s unsolved mystery, a look at how psychotherapy works, and two strong characters.” —Maureen Stapleton, actor and author
“Owens’ combination of a thoroughly professional viewpoint and her elegant writing style make for an irresistible read.” —Marge Champion, dancer and author

Carole Owens received her doctorate from Yeshiva University in 1987. She is a licensed independent clinical social worker and a licensed marriage and family therapist. She is a clinical member of the American Association of Marriage and Family Therapists, a certified member of the American Association of Clinical Mental Health Counselors, and a member of the New York Academy of Sciences. Her doctoral dissertation, “Clinical v. Psychometric Judgement,” is a study of comparative methods of diagnosis. She is a contributor to The Stockbridge Story and the author of The Birkshire Cottages: A Vanishing Era and The Lost Days of Agatha Christie. She lives in Massachusetts.