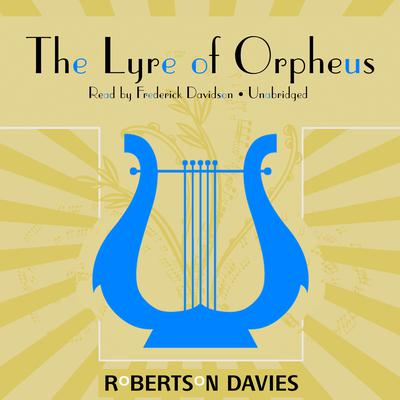 The Lyre of Orpheus: The Cornish Trilogy, Book 3

The Cornish Foundation is thriving under the directorship of Arthur Cornish when he and his beguiling wife, Maria Theotoky, decide to undertake a project worthy of the late art expert, collector, and notable eccentric Francis Cornish, whose vast fortune endows the Foundation. It is decided that the Foundation will fund the doctoral work of one Hulda Schnakenburg, a grumpy, remarkably unattractive, and extraordinarily talented music student. Her task is to complete the score of an unfinished opera by the Romantic composer E. T. A. Hoffmann. Additionally, and against all common sense, the Foundation will endeavor to stage the opera, entitledArthur of Britain, or The Magnanimous Cuckold. The scholarly priest Simon Darcourt finds himself charged with writing the libretto.

As the production takes shape, complications both practical and emotional arise: the gypsy in Maria's blood rises with a vengeance; Darcourt stoops to petty crime; and various others indulge in perjury, blackmail, and other unsavory pursuits. Hoffman's dictum, "The lyre of Orpheus opens the door of the underworld," proves all too true—especially when the long-hidden secrets of Francis Cornish himself are finally revealed.

“Robertson Davies is the sort of novelist readers can hardly wait to tell their friends about.” —Washington Post Book World
“Packed with interesting details of opera history and production, boasting some new, eccentric characters, and pulling together Davies’s various themes in a harmonic resolution…[with] intelligent observations and playful allusions.” —Publishers Weekly
“[Davies’] characters fascinate, and his gentle, graceful style makes no demands on the reader. His civilized prose should read well aloud—indeed, Davidson helps one hear its strengths. He provides an intelligent, expressive, well-paced rendering of the narrative…as well as vivid impersonations of the characters.” —AudioFile
“Old fans will be delighted, and new readers intrigued…With his wonderfully complex yet controlled plot, deft portrayal of eccentric characters, and great wit, Davies effectively satirizes the world of universities and foundations.” —Library Journal
“Hilariously effective.” —Booklist (starred review)
“Davis once again delivers the goods…A spry jaunt from an old master—once again in full command of the form.” —Kirkus Reviews (starred review)