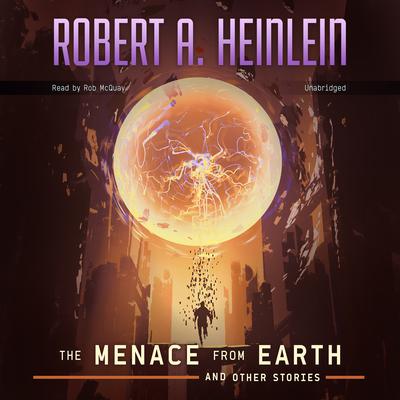 The Menace from Earth, and Other Stories

By Robert A. Heinlein
Read by Rob McQuay

From a master of science fiction comes eight startling stories of time and space.

In “The Year of the Jackpot,” a statistician charts a curve of unusual happenings throughout the earth, only to find that his facts and figures prove the approach of the end of the world.

In “By His Bootstraps,” a man steps thirty thousand years into time and is trapped in the fourth dimension with three strange, yet oddly familiar, people.

In “Goldfish Bowl,” people disappear one by one, in great swirling balls of fire, and are held captive in space by beings of vastly superior intelligence.

Also in this collection of short stories originally published in 1959 are “Columbus Was a Dope,” “The Manace from Earth,” “Sky Lift,” “Project Nightmare,” and “Water Is for Washing.”

“Much of what made Heinlein famous is audible here: contempt for government and convention, stark self-reliance, prescient scientific vision.” —AudioFile

Robert Anson Heinlein (1907–1988) was born in Missouri. He served five years in the US Navy and then attended graduate classes in mathematics and physics at UCLA. After a variety of jobs, he began to write science fiction in 1939. He is a four-time winner of the Hugo Award and a recipient of three Retro Hugos, and in 1975 he was named the first recipient of the Grand Master Award for lifetime achievement. Several of his books were New York Times bestsellers, and his worldwide bestsellers have been translated into twenty-two languages.