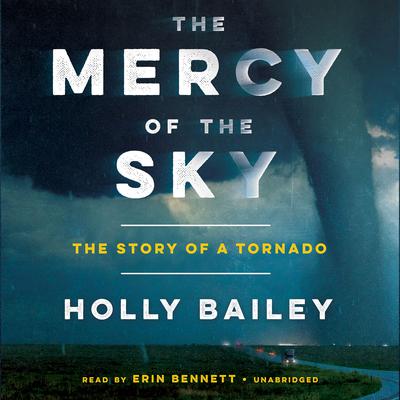 The Mercy of the Sky: The Story of a Tornado

The Mercy of the Sky is the harrowing inside account of Oklahoma’s deadliest tornado, penned by a local writer who became a national correspondent.

Oklahomans have long been known for their fatalism and grit, but even old-timers are troubled by the twisters that are devastating the state with increasing frequency. On May 20, 2013, the worst tornado on record landed a direct hit on the small town of Moore, destroying two schools while the children cowered inside.

Oklahoma native Holly Bailey grew up dreaming of becoming a storm chaser. Instead she became Newsweek’s youngest-ever White House correspondent, traveling to war zones with Presidents Bush and Obama. When Moore was hit, Bailey went back both as a journalist and a hometown girl and spoke with the teachers who put their lives at risk to save their students, the weathermen more revered than rock stars and more tormented than they let on, and many shell-shocked residents. In The Mercy of the Sky, Bailey does for the Oklahoma flatlands what Sebastian Junger did for Gloucester, Massachusetts, in The Perfect Storm, telling a dramatic, page-turning story about a town that must survive the elements—or die.

“I read The Mercy of the Sky with absolute fascination…Bailey brings together riveting science, human drama, courage, tragedy, and redemption to create a quintessential American story. Powerful and moving.” —Douglas Preston, #1 New York Times bestselling author
“A gripping, heartbreaking, and heartwarming account of the monster tornado that ravaged Moore, Oklahoma, in 2013. It will leave you emotionally drained but glad you journeyed into the heart of this extraordinary storm with Bailey as your guide.” —Daniel James Brown, #1 New York Times bestselling author of The Boys in the Boat
“Bailey ramps up the tension with a skilled hand, following the tornado’s path through town until residents emerge from the wreckage to a landscape they ‘no longer recognized.’ Bailey’s artistry will leave more than a few readers gasping for breath.” —Publishers Weekly (starred review)
“Tracking a furious, lethal storm…A mile wide, with winds over two hundred miles per hour, the May 20 tornado began ‘as nothing more than a wispy little funnel, dancing shyly between the clouds and the ground’; within minutes, it ‘morphed into a hulking beast devouring everything in its path’: houses, trucks, electrical wires, even grass…Bailey’s prose vividly evokes the tornado’s power and menace. Storm chasers will find thrills in this tale of nature’s wrath.” —Kirkus Reviews
“Holly Bailey’s riveting writing brings you to the center of the storm—and it’s terrifying. She makes you feel a community’s loss—and it’s devastating. And she brings you inside people’s lives as they heal—and it is inspiring. Bailey is a brilliant storyteller who is no outsider to Moore. She’s a hometown girl with a keen sense for Oklahoma’s character and resilience. You feel that on every page.” —David Greene, cohost of NPR’s Morning Edition and author of Midnight in Siberia
“Holly Bailey makes you feel the wrath of a killer tornado. She makes you taste it, smell it, and hear it. No one who reads The Mercy of the Sky will ever be able to unfeelingly brush past headlines about funnel clouds reaching from the sky to spread destruction again.” —Tom Shroder, author of Fire on the Horizon: The Untold Story of the Gulf Oil Disaster

Holly Bailey is a correspondent for Yahoo News and was Newsweek’s White House correspondent. An Oklahoma City native, she grew up going to school in Moore and now lives in Brooklyn.