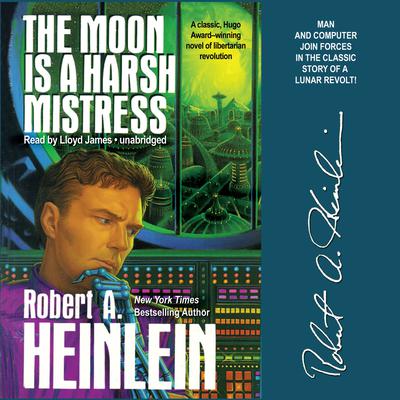 The Moon is a Harsh Mistress

By Robert A. Heinlein
Read by Lloyd James

Winner of the Hugo Award for Best Novel in 1967

Winner of the 1983Prometheus Hall of Fame Award

Revolution is brewing on twenty-first-century Luna, a moon-based penal colony where oppressed “Loonies” are being exploited by a harsh Authority that controls it from Earth. Against all odds, a ragtag collection of dissidents has banded together in revolt, including a young female radical, an elderly academic, a one-armed computer jock, and a nearly omnipotent supercomputer named Mike, whose sentience is known only to this inner circle and who is committed to the revolution for reasons of his own.

Drawing many historical parallels with the War of Independence, Heinlein’s fourth Hugo Award–winning novel is a gripping tale bursting with politics, humanity, passion, innovative technical speculation, and a firm belief in the pursuit of human freedom.

Robert A. Heinlein was the most influential science fiction writer of his era, winning the Hugo Award for best novel a record four times. The Moon Is a Harsh Mistress was the last of these Hugo-winning novels and is widely considered his finest work.

"We proceed down the path marked by his ideas. He shows us where the future is." —Tom Clancy
“Adrenalizing, mind-stretching, conviction-testing…unmatched by any contemporary!”  —Theodore Sturgeon
“[Heinlein] gives you action and adventure, but as you read the novel, you’re forced to consider, in this new world, new ways of thinking about old problems.” —SF Reviews

Robert Anson Heinlein (1907–1988) was born in Missouri. He served five years in the US Navy and then attended graduate classes in mathematics and physics at UCLA. After a variety of jobs, he began to write science fiction in 1939. He is a four-time winner of the Hugo Award and a recipient of three Retro Hugos, and in 1975 he was named the first recipient of the Grand Master Award for lifetime achievement. Several of his books were New York Times bestsellers, and his worldwide bestsellers have been translated into twenty-two languages.