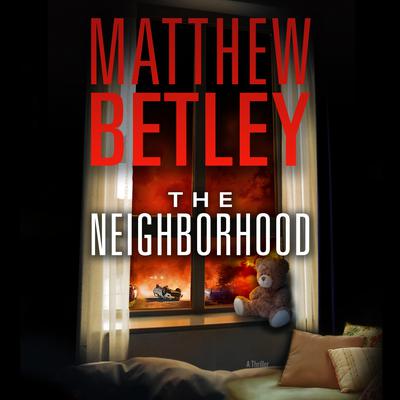 It’s not such a beautiful day in the neighborhood ...

From the critically acclaimed author of Overwatch comes a can’t-miss, brand-new novel that proves Matthew Betley is the modern master of the unputdownable page-turner.

For most of the citizens of Hidden Refuge, it’s an ordinary Friday night in an ordinary American town. But when men claiming to be police officers show up at their doorsteps in the middle of the night, ordering them to evacuate for their own safety, it’s only the beginning of a long, dark night that will prove to be anything but ordinary. Unbeknownst to most of its residents, Hidden Refuge contains something that very dangerous men desperately want, and they are more than willing to kill to get it.

But Hidden Refuge contains another secret—Zack Chambers, a seemingly unassuming programmer and suburbanite family man who is far more than meets the eye. And while Zack dearly hoped that he’d never again need to use the deadly skills he’d acquired in his former life, when push comes to shove, he’ll do whatever it takes to protect himself and his neighbors. Even if it means taking on a small army of trained killers with only his wits and a ragtag group of allies.

Before the night is over, the blood of the innocent and the guilty alike will be shed, old scores will be settled, and shocking twists will be revealed. Propulsive, brilliantly plotted, and packed with Matthew Betley’s trademark blend of gritty realism and edge-of-your-seat action, The Neighborhood is a can’t-miss thriller.

“A must-read, intense thriller with a badass protagonist you will stand up and cheer for. Betley will keep you on the edge of your seat until the very last page. Don’t miss this one.” —Joan Lunden
“Propulsive, suspenseful, and relentless, The Neighborhood is a roller-coaster thriller packed with twists and gritty action—Matthew Betley’s best novel yet. Grab it and hold on for a great ride.” —Meg Gardiner, author of The Dark Corners of the Night
“Reading The Neighborhood feels like watching an action film set in suburbia. My favorite of Matthew Betley’s novels.” —Karen Cleveland, New York Times bestselling author of Need to Know
“Marine veteran Matthew Betley proves again that he knows how to write a blood-pumping modern thriller. With The Neighborhood, Betley solidifies his position as one of America’s top action/suspense scribes. Put aside the day when you pick it up because you won’t be able to put it down!” —Kurt Schlichter, veteran, media personality, and bestselling author of the Kelly Turnbull series
“Die Hard in a gated community, Matthew Betley’s new book, The Neighborhood, is a stand-on-the-pedal, runaway-train thrill ride of the year. Ever find yourself looking down the wrong end of a gun barrel? That’s exactly what this relentless book will do to your heart rate.” —Chris Hauty, national bestselling author of Deep State and Storm Rising
“Supremely suspenseful. The action builds like a storm on the horizon. You see the dark clouds gathering. You hear the thunder getting louder. You may think you’re ready when the lightning strikes, but you’re not. It’s everywhere at once and never lets up. You can’t put down The Neighborhood.” —David Ricciardi, author of the Jake Keller series from Berkley Publishing
“Matthew Betley is back in a big way with The Neighborhood, an action-packed, bloody, highly immersive thriller that is guaranteed to elicit fist-pumps and gasps from readers as they progress through this entertaining novel…The Neighborhood is a summer blockbuster movie waiting to happen. It’s got everything you’d expect from a cinematic thrill ride…What more could you possibly want?…Think Die Hard, Lethal Weapon, Under Siege, and The Rock…Big props to Matthew Betley for crafting a fun, edge-of-your-seat thriller…A very enjoyable experience!” —Best Thriller Books
“You’ve never read a thriller quite like this one…Fresh, gripping, and as fast-paced as anything he’s ever written, Matthew Betley takes readers on a wild ride through The Neighborhood, delivering a book that straddles two genres in a way that only he could write.”  —Ryan Steck, The Real Book Spy

Matthew Betley is the author of the Logan West Thrillers and a former Marine Officer of ten years. Trained as a scout sniper platoon commander, an infantry officer, and a ground intelligence officer, his experiences include deployments to Djibouti after September 11, and Fallujah and Iraq prior to the Surge. A New Jersey native who considers Cincinnati home but now resides on the East Coast, he graduated from Miami University in Oxford, Ohio, with a BA in psychology and minors in political science and sociology.