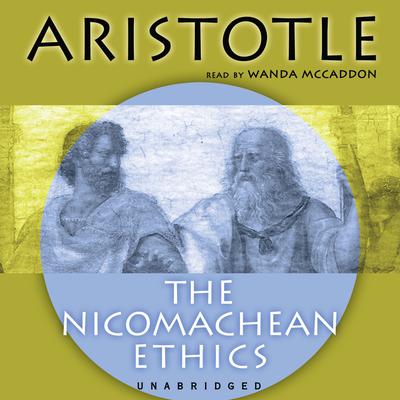 By Aristotle
Translated by David Ross
Read by Wanda McCaddon

Named for Aristotle's son, Nicomachus, who was the first to edit this work, The Nicomachean Ethics plays a prominent role in defining Aristotelian ethics. In the ten books of this work, Aristotle explains the good life for man: the life of happiness.

For Aristotle, happiness exists when the soul is in accordance with virtue. Virtue exists in a deliberate choice of actions that take a middle course between excess and deficiency; this is the famous doctrine of the "golden mean." Courage, for example, is the mean between cowardice and rashness. Justice is the mean between a man's getting more or less than his due. The supreme happiness, according to Aristotle, is to be found in a life of philosophical contemplation or, at least, in a virtuous life of political activity and public munificence.

A student of Plato and a teacher of Alexander the Great, Aristotle is one of the towering figures in Western thought.

“Very useful as a cornerstone for our discussion of ethics and the Western moral tradition.” —Dominic A. Aquila, Rochester Institute of Technology
“An essential classic in the field of ethics.” —Claudia Card, University of Wisconsin

Aristotle (384–322 BC) was a Greek philosopher, scientist, and physician. As a young man, he became a student under Plato in Athens. In 342, he became the tutor of young Alexander the Great in Macedonia. After that, Aristotle returned to Athens to establish his own school and research institute, the Lyceum. His writings have profoundly affected the whole course of philosophy, from ancient times to the present.