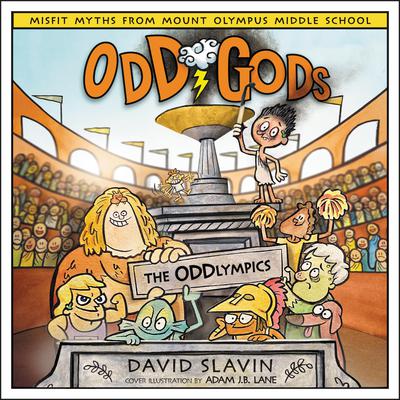 Diary of a Wimpy Kid meets Percy Jackson in Odd Gods, the critically acclaimed and hilarious illustrated middle grade series about the oddest Greek gods you’ve never heard about before.

It’s bad enough that the Greek Odds have to compete against their Roman twins, but when Zeus and his Roman counterpart, Jupiter, get a little too involved, the Greek and Roman kids end up in a competition over who gets to run the WHOLE mountain.

Will the Greek Gods and Odds find a way to work together to defeat the Romans, or will they have to leave their hilltop home…forever?

Get ready to overcome the odds in the third hilarious book about the Odd Gods from author David Slavin.

David Slavin’s stories for children are featured in the book and CD of Marlo Thomas’s Thanks & Giving: All Year Long, and the 35th Anniversary edition of Free to Be…You and Me. He is the co-author of three books of satire: Young Dick Cheney: Great American; ’Twas the Night Before Christmas 21st Century Edition; and Dog on the Roof!: On the Road with Mitt and the Mutt. His cultural and political commentary has appeared in the Los Angeles Times, the New York Times, the Chicago Tribune, Salon.com, and the Huffington Post, and he was a regular contributor—as both a writer and performer—to National Public Radio’s All Things Considered for over a decade. David has also been a voice-over artist for over 20 years, lending his voice to hundreds of radio and television commercials, numerous audiobooks, and narrations for PBS, National Geographic, the BBC, and The Late Show with David Letterman. He lives in New York City with his wife, two children, sight-challenged dog, and noisy bird.