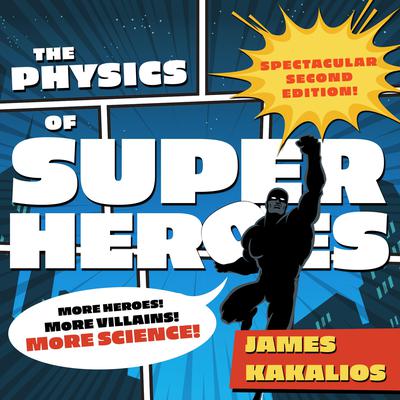 A complete update to the hit book on the real physics at work in comic books, featuring more heroes, more villains, and more science.

Since 2001, James Kakalios has taught "Everything I Needed to Know About Physics I Learned from Reading Comic Books," a hugely popular university course that generated coast-to-coast media attention for its unique method of explaining complex physics concepts through comics. With The Physics of Superheroes, named one of the best science books of 2005 by Discover, he introduced his colorful approach to an even wider audience. Now Kakalios presents a totally updated, expanded edition that features even more superheroes and findings from the cutting edge of science. With three new chapters and completely revised throughout, the book that explains why Spider-Man's webbing failed his girlfriend, the probable cause of Krypton's explosion, and the Newtonian physics at work in Gotham City is electrifying from beginning to end.

James Kakalios is a professor of physics at the University of Minnesota. He has published more than one hundred physics papers and has conducted research on a variety of obscure physical phenomena. The popularity of his seminar “Everything I Needed to Know About Physics I Learned from Reading Comic Books” led to the publication of The Physics of Superheroes, which was named one of the best science books of 2005 by Discover magazine. Kakalios also served as a science consultant on the adaptation of the graphic novel Watchmen into a major feature film. He lives in Minneapolis with his wife and three children.