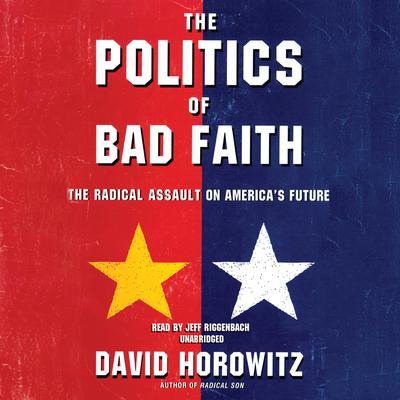 The Politics of Bad Faith: The Radical Assault on America’s Future

In this intellectual companion piece to David Horowitz’s acclaimed autobiography, Radical Son, the most famous defector from the radical Left argues that the historic themes of that conflict still drive our politics and animate our cultural debates today.

With keen political insight and a masterful grasp of history, Horowitz traces the radical project from its origins in nineteenth-century socialism to the disastrous excesses of such current “progressive” causes as political correctness, radical feminism, racial preferences, and what he describes as the nihilistic campaign to “deconstruct” the American idea itself. He points out the refusal of the political Left to learn from the checkered history of progressive movements for social justice and equal outcomes, and warns that this refusal is creating a new “cold war” against America—a culture war that pits “progressives” against America’s founding principles and ideas.

“A vigorous polemic against the American Left…For conservative readers, he performs the helpful task of clarifying their own convictions; for left-of-center ones, he provides a penetrating glimpse into the conservative mindset.” —Amazon.com, editorial review
“An exegesis on the metamorphosis of Marxist thought into modern leftism, and an explanation for why the Democratic Party has little left to say.” —American Spectator
“Horowitz is an energetic polemicist…Recommended for libraries with collections in conservative thought.” —Library Journal
“Horowitz attacks with the zeal of an ex-believer…A polemic that brooks no disagreement.” —Booklist

David Horowitz grew up a “red diaper baby” in a communist community in Sunnyside, Queens. He studied literature at Columbia, taking classes from Lionel Trilling, and became a “new leftist” during the Soviet invasion of Hungary in 1956.