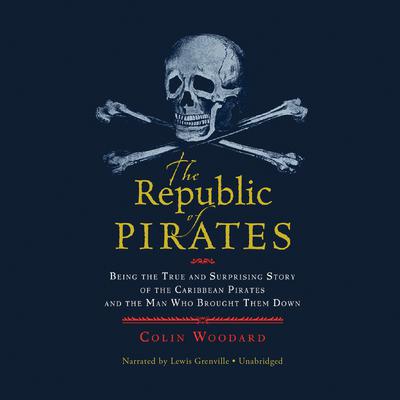 The Republic of Pirates: Being the True and Surprising Story of the Caribbean Pirates and the Man Who Brought Them Down

In the early eighteenth century, the Pirate Republic was home to some of the great pirate captains, including Blackbeard, “Black Sam” Bellamy, and Charles Vane. Along with their fellow pirates—former sailors, indentured servants, and runaway slaves—this “Flying Gang” established a crude but distinctive democracy in the Bahamas, carving out their own zone of freedom in which servants were free, blacks could be equal citizens, and leaders were chosen or deposed by a vote. They cut off trade routes, sacked slave ships, and severed Europe from its New World empires. And for a brief, glorious period, the Republic was a success.

“This amazing tale is adroitly narrated by Lewis Grenville…His deep, somewhat gravelly yet resonant voice never wavers.” —AudioFile
“Adds a new dimension to an era that was, in equal parts, thrilling and disturbing…[with] rip-roaring adventure stories from a distant past [and]…an opportunity to understand pirates as they truly were—and be grateful that the worst of them, at least, are gone.” —New York Times Book Review
“Myth-busting chronicle of the so-called golden age of piracy….[Woodard] challenges what we think we know about these ruffians, dispelling notions of dictatorial rule aboard ship in favor of an image of egalitarianism.” —Boston magazine
“Meticulously researched and thrillingly told…Woodard brings this slice of outlaw history gloriously to life.” —Baltimore City Paper
“One of the most realistic views ever of the Golden Age of Piracy in the 1700s…Narrative history at its best.” —Winston-Salem Journal (North Carolina)
“A well-researched book that goes far beyond the popular visions of pirates in movies and novels.” —Madison Capital Times (Wisconsin)
“As colorful and exciting as fiction…Woodard’s thrilling narrative neatly navigates the Caribbean’s dangerous seas.” —Kirkus Reviews (starred review)
“Finds contemporary resonance in an unexpected place: the story of how a group of pirates organized a surprisingly egalitarian society in the Caribbean–and how they ran afoul of the empires of the day.” —Signature Reads
“Woodard tells a romantic story about Caribbean pirates of the ‘Golden Age’ (1715–1725)—whom he sees not as criminals but as social revolutionaries…A fast-paced narrative that will be especially attractive to lovers of pirate lore and to vacationers who are Bahamas-bound.” —Publishers Weekly
“This breezy, fast-moving book is filled with exciting action and colorful characters. It will provide general readers and those with a special interest in the period much enjoyment.” —Booklist
“While American piracy extends from the 1600s until almost the end of the nineteenth century, the real heyday was the brief span of 1715 to 1725 that Colin Woodard covers brilliantly in The Republic of Pirates. This is the first incisive look at the world of Blackbeard, Stede Bonnet, Anne Bonny, and their compatriots, and it illuminates as never before one of the most storied yet misunderstood episodes in our past.” —William C. Davis, author of The Pirates Laffite

Colin Woodard is the author of numerous books, including Ocean’s End: Travels through Endangered Seas, American Nations: A History of Eleven Rival Regional Cultures of North America, The Lobster Coast, and many others. He is a regular contributor to the Christian Science Monitor and the San Francisco Chronicle.