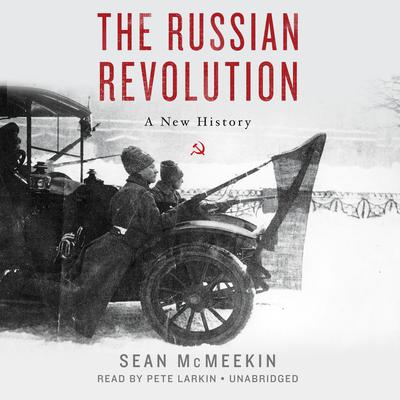 The Russian Revolution: A New History

The definitive, single-volume history of the Russian Revolution, from an award-winning scholar

In The Russian Revolution, acclaimed historian Sean McMeekin traces the events which ended Romanov rule, ushered the Bolsheviks into power, and introduced Communism to the world. Between 1917 and 1922, Russia underwent a complete and irreversible transformation. Taking advantage of the collapse of the Tsarist regime in the middle of World War I, the Bolsheviks staged a hostile takeover of the Russian Imperial Army, promoting mutinies and mass desertions of men in order to fulfill Lenin’s program of turning the “imperialist war” into civil war. By the time the Bolsheviks had snuffed out the last resistance five years later, over 20 million people had died, and the Russian economy had collapsed so completely that Communism had to be temporarily abandoned. Still, Bolshevik rule was secure, owing to the new regime’s monopoly on force, enabled by illicit arms deals signed with capitalist neighbors such as Germany and Sweden who sought to benefit-politically and economically-from the revolutionary chaos in Russia.

Drawing on scores of previously untapped files from Russian archives and a range of other repositories in Europe, Turkey, and the United States, McMeekin delivers exciting, groundbreaking research about this turbulent era. The first comprehensive history of these momentous events in two decades, The Russian Revolution combines cutting-edge scholarship and a fast-paced narrative to shed new light on one of the most significant turning points of the twentieth century.

“Narrator Pete Larkin’s crisp articulation and resonant voice greatly complement McMeekin’s study. Despite the audiobook’s serious topic, Larkin has a friendly, likable tone, and his measured pace helps to present the facts clearly. He admirably pronounces the Russian words used in the text, providing a convincing accent while still making the words understandable for the listener. McMeekin’s meticulous historical study is well matched with Larkin’s conscientious narration.” —AudioFile
“Well-written, with new details from archival research used for vivid descriptions of key events.” —New York Times Book Review
"[A] powerful revisionist history… Sean McMeekin is a gifted writer with historical talents equal to the challenge of helping the reader to follow the events of the revolution and appreciate their terrible significance…[A] magisterial study.” —Times (London)
"[A] superb and eye-opening account of this important chapter in twentieth century history…McMeekin is a reliable guide to a complex story and the book moves seamlessly and clearly across a vast landscape of people and events.” —Christian Science Monitor

Sean McMeekin is a professor of history at Bard College. He is the author of several books of history, which have won numerous award. In 2010, he won the Norman B. Tomlinson Jr. Book Prize for The Russian Origins of the First World War and in 2011 the Barbara Jelavich Book Prize for The Berlin–Baghdad Express. In 2015, he was the recipient of the Arthur Goodzeit Book Award for The Ottoman Endgame and in 2016 the Historian’s Prize.