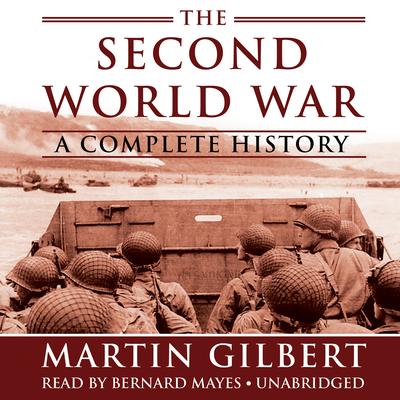 It began with the German invasion of Poland on September 1, 1939. By the time it came to an end on V-J Day—August 14, 1945—it had involved every major power and become global in its reach. In the final accounting, it would turn out to be, in both human terms and material resources, the costliest war in history, taking the lives of forty-six million people.

With unparalleled scholarship and breadth of vision, Gilbert weaves together all of the war’s aspects––the political, the military, the diplomatic, and, not least, the civilian––charting an almost day-by-day account of the terrible progress of the war’s juggernaut of death and destruction. Through it all, his aim is to show what happened, not from the point of view of any one of the warring nations but from a global perspective. The result is the first total history of this global war, a work that is both a treasure trove of information and a gripping dramatic narrative.

“Brings the losses and the horrors of the war home to us more urgently than a more accented account might do.” —New York Times Book Review
“Mr. Gilbert brings the strongest possible credentials to his history of World War II, and the result is a magisterial work that shows how the greatest war ever fought reached into every corner of the globe.” —New York Times
“In his transmission of the horror of the war, Martin Gilbert has achieved something no historian but he could. There is indeed a relentless force about chronology when it is used as a tool by a historian of the status of Martin Gilbert.” —Sunday Telegraph (London)
“Gilbert’s flowing narrative is spiced with anecdotal details culled from diaries, memoirs, and official documents. He is especially skillful at interweaving summaries of military strategy with vignettes of civilian suffering.” —Newsweek
“Masterful…Though the military aspect is told with noteworthy clarity and narrative power, most impressive is Gilbert’s presentation of WWII as primarily a matter of organized evil and mass madness.” —Publishers Weekly

Martin Gilbert, one of Britain’s most distinguished historians, was knighted in 1995. A fellow of Merton College, Oxford, he is also the official biographer of Winston Churchill. Among his books are The Holocaust, The Second World War, Churchill: A Life, Auschwitz and the Allies, The First World War, and Never Again.