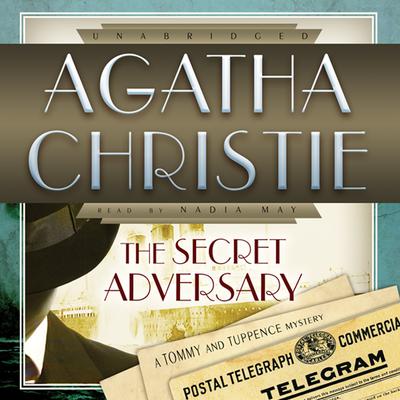 By Agatha Christie
Read by Nadia May

The Tommy and Tuppence Mysteries: Book 1

Just after World War I, Tommy Beresford and Tuppence Cowley are desperately short of money. With a shortage of job opportunities, they form a partnership, hiring themselves out as “young adventurers, willing to do anything, go anywhere.” In their first dangerous assignment, they must use all their ingenuity to save not only their own lives but also the life of a mysterious girl.

The girl in the photograph has been missing for five years. Neither her body nor the secret documents she was carrying have ever been found. Now postwar England’s economic recovery depends on finding her and getting the papers back. But the two young Brits working undercover for the ministry, Tommy and Tuppence, know only that her name was Jane Finn and the only photo of her is in the hands of her rich American cousin. They don’t yet know about a mysterious and ruthless man called “Mr. Brown” or the beautiful but sinister older woman who knows all about Jane Finn—and therefore must die.

“Refreshingly original.” —Times Literary Supplement (London)
“An excellent yarn…reader[s] will find it as impossible as we did to put it aside until the mystery has been fathomed.” —Daily Chronicle (London)
“We promise our readers an exciting story of adventure, full of hairbreadth escapes, and many disappointments if they try to guess the riddle before the author is ready to give them the clue…An excellent story.” —Saturday Review
“Nadia May reads with her usual charging enthusiasm…She enlivens the repartee between the two leads, relishes the other characters, and enjoys herself immensely.” —AudioFile

Dame Agatha Christie (1890–1976) was a British crime writer best known for her detective novels and short stories. According to Guinness World Records, she is the bestselling novelist of all time, her novels having sold over two billion copies and having been translated into more than one hundred languages. The Agatha Award for best mystery and crime writers was named in her honor.