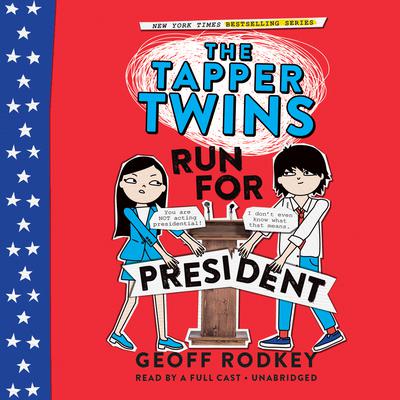 The Tapper Twins Run for President

By Geoff Rodkey
Read by a full cast

In their third uproarious oral history, the Tapper Twins take their sibling feud to the political stage as they race to become class president!

Told as a series of interviews, smartphone photos, screenshots, text messages, and social media bursts, The Tapper Twins Run for President is guaranteed to be the absolutely funniest presidential race since 1776.

Claudia Tapper wants to become President of the United States someday, and her political career has begun in earnest at Culver Prep. She’s the sixth grade class president, and has every reason to presume she’ll get reelected. Reese Tapper could not care less about student government—until his soccer game is banned from Culvert’s only outdoor space, and he learns becoming class president is his best shot at overturning the new rule. And thus, the greatest political rivalry in Culvert Prep history is born! In a tangle of evil-genius advisors, meddlesome best friends, negative campaign attacks, and outrageously funny missteps, Claudia and Reese duke it out to see who will rule the school.

"Everyone--not just native New Yorkers--will enjoy this madcap, uproarious romp around the Big Apple.... It won't take long for fans of the first installment, or new fans, to drop right into the action, hilarity, and mayhem. —School Library Journal
Rodkey's comical picture of the political arena's cut and thrust is certainly timely...the parallels with campaigns on broader stages will be obvious to all. —Kirkus Reviews

Geoff Rodkey is the author of the bestselling Tapper Twins comedy series; the Chronicles of Egg adventure trilogy; and The Story Pirates Present: Stuck in the Stone Age, a comic novel bundled with a how-to guide for kids who want to create stories of their own. He is also the Emmy-nominated screenwriter of such films as Daddy Day Care and RV. Learn more at geoffrodkey.com, and follow Geoff on Twitter at @GeoffRodkey.