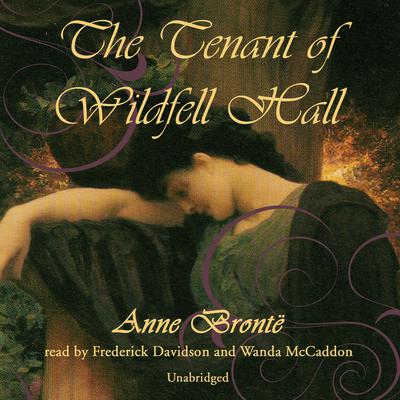 The Tenant of Wildfell Hall

By Anne Brontë
Read by Frederick Davidson and Wanda McCaddon

A BuzzFeed Books Pick of Underrated Books You Should read ASAP

Like her sisters Emily and Charlotte, Anne Brontë published under a male pseudonym, yet still this novel was scorned by many for its exposure of the abusive male chauvinism that was concealed, like all things sexual, during the Victorian Era.

Just as Anne had to use a male pseudonym in order to publish, Helen Graham, the novel’s protagonist and a battered wife, must assume an alias in order to gain freedom from her suffering. With her young child, Helen takes up residence at Wildfell Hall, shrouding her past in secrecy yet earning the attentions of a young unmarried country gentleman. Anne Brontë employs the atmosphere of the bleak Yorkshire moors and the cold, rugged gloom of the fictional mansion to set the stage for a tragedy that reveals the secret violence in a society considered well-mannered.

With a powerful plot that reveals the troubles of the times, The Tenant of Wildfell Hall is now lauded as a classic of Victorian literature.

“Frederick Davidson and Nadia May take the roles of the storytellers, and they do an excellent job of portraying both the male and female voices. May reads Helen’s diary and correspondence. May’s voice is young, fresh and naive, well-suited to Helen as a young woman; the voices of the men are excellent as well. Her laughter sounds genuine, and her portrayal of drunken men is perfect. She moves the narrative along crisply, with just the right touch of drama. Davidson’s voicing is also excellent…The choice to use both male and female narrators was a good one, enlivening the story and underlining the differences between the sexes in Victorian England.” —AudioFile
“Anne’s second and last novel was published to great success in 1848. Its subject-matter at the time was so shocking that one reviewer declared it ‘utterly unfit to be put into the hands of girls.’ The novel is vast but primarily tells the story of Helen, whose husband is abusive and dissipated…The book’s most shocking moments are the ones which depict Arthur’s abusive attempts to get the young child drunk, seemingly to spite and hurt his wife, and it’s clear from the narrative that Brontë had a lot of first-hand experience in dealing with and subduing drunk men. The book was so upsetting to her sister Charlotte that, after Anne’s death she passed on the chance to have it reprinted, and the book was neglected for a really long time. Today it is widely considered to be a landmark in early feminist literature, but its frank depictions of addiction within marriage are just as deserving of acclaim.” —New York Times Book Review
“Of the three Brontë sisters, Emily and Charlotte are better known, yet it is Anne’s work which carries some of the strongest…themes…While the plot continues and mysteries are unraveled, what Helen and Gilber say…reinforces Anne Brontë’s indictment of the sexual double standards of nineteenth-century Britain.” —Erica Bauermeister, 500 Great Books by Women
“Every reader who has felt the power of Jane Eyre and Wuthering Heights comes, sooner or later, to The Tenant of Wildfell Hall. Anne Brontë, with all the Brontë taste for violence and drama…did not shrink. She used the material at hand, and shaped it with singular honesty and seriousness…Anne is a true Brontë.” —Margaret Lane, Brontë scholar

Anne Brontë (1820–1849) was born in Yorkshire, the youngest of six children. Her mother died within a year of her birth, and her two eldest siblings died four years later. The Brontë children were raised in an isolated Yorkshire parsonage, where they thrived in fantasy worlds that drew on their voracious reading of Byron, Scott, Shakespeare, and Gothic fiction. Anne’s first novel, Agnes Grey, was published in a volume together with Emily’s Wuthering Heights in 1847. The Tenant of Wildfell Hall reflects her brother Branwell’s gradual descent into alcoholism, drug addiction, and madness. Both Branwell and Emily died of tuberculosis in 1848; Anne succumbed to the same illness in 1849.