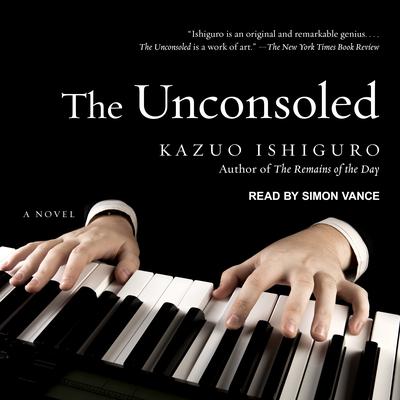 From the winner of the Nobel Prize in Literature and author of the Booker Prize–winning novel The Remains of the Day, here is a novel that is at once a gripping psychological mystery, a wicked satire of the cult of art, and a poignant character study of a man whose public life has accelerated beyond his control.

The setting is a nameless Central European city where Ryder, a renowned pianist, has come to give the most important performance of his life. Instead, he finds himself diverted on a series of cryptic and infuriating errands that nevertheless provide him with vital clues to his own past. In The Unconsoled Ishiguro creates a work that is itself a virtuoso performance, strange, haunting, and resonant with humanity and wit.

With this stunning new novel, cast in the form of a postmodern nightmare, Ishiguro tells a powerful story in which he once again exploits a narrator's utter lack of self-knowledge to create a devastating deadpan irony. —Publishers Weekly Starred Review
“A work of great interest and originality…Ishiguro has mapped out an aesthetic territory that is all his own.” —New Yorker

Kazuo Ishiguro, the author of several acclaimed novels, won the prestigious Nobel Prize for Literature in 2017. The Remains of the Day won the Booker Prize and was the basis for a major motion picture. The Buried Giant was a New York Times bestseller, A Pale View of Hills won the Winifred Holtby Memorial Prize, and An Artist of the Floating World won the Whitbread Book of the Year Award. The Unconsoled won the Cheltenham Prize and Never Let Me Go won the Corine Internationaler Buchpreis, the Serono Literary Prize, the Casino de Santiago European Novel Award, and was shortlisted for the Booker Prize. In 1995 Ishiguro received an OBE for Services to Literature and in 1998 the French decoration of Chevalier de L’Ordre des Arts et des Lettres. He born in Nagasaki, Japan, in 1954 and moved to Britain at the age of five.