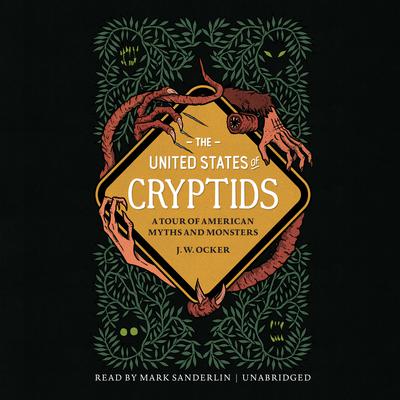 The United States of Cryptids: A Tour of American Myths and Monsters

Come and meet the monsters in our midst, from bigfoot to batsquatch and beyond!

Welcome to the United States of Cryptids, where mysterious monsters lurk in the dark forests, deep lakes, and sticky swamps of all fifty states. From the infamous Jersey Devil to the obscure Snallygaster, travel writer and chronicler of the strange J. W. Ocker not only uncovers the bizarre stories of these creatures but investigates the ways in which communities have embraced and celebrated their local cryptids. Readers will learn about:

Whether you believe in bigfoot or not, this fully illustrated compendium is a fun, frightening, fascinating tour through American folklore and history, exploring not just the stories we tell about monsters but also what stories of monsters say about us.

“This book is so fun that I couldn’t put it down. It reminded me that life is short, death is nigh and a little humor can help us seize the day.” —The New York Times on Cursed Objects