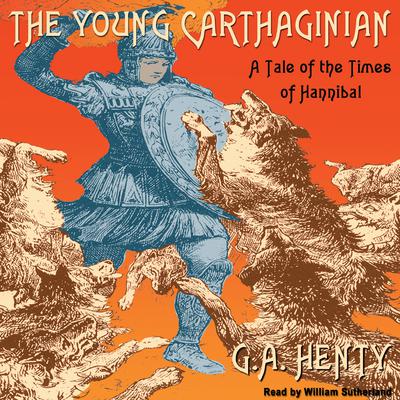 The Young Carthaginian: A Tale of the Times of Hannibal

By G. A. Henty
Read by William Sutherland

G. A. Henty’s latest historical adventure story for boys is set in ancient times during the Punic wars between Carthage and Rome, who are vying for world dominance. It follows the adventures of young Malchus, an officer in Hannibal’s army, as the army makes its incredible journey across the Alps, bringing cannons and elephants to overpower the great Roman Empire. Malchus has an unsullied energy that allows him to escape attacks from lions and wolves and maneuver through Carthage’s subterranean reservoir on a raft. Even though Carthage is eventually defeated, the thrilling clashes and vexing dilemmas gain the listener’s undivided attention, while the fascinating detail of the story provides an absorbing lesson in ancient history.

“Henty makes history fun, similar to the way a mother can make spinach taste good if it is concealed in the midst of something else.” —Indianapolis News
“Simply outstanding…A totally thrilling historical action/adventure tale that will rivet the listener’s attention from beginning to end. Superbly and dramatically narrated by William Sutherland…An impressive, ‘theater of the mind’ quality entertainment experience.” —Library Bookwatch

George Alfred Henty (1832–1902) was born in Trumpington, England. He studied at Cambridge but left without his degree to serve in the Crimean War. After several failed attempts at careers, he decided in 1865 to become a writer, beginning as a correspondent for the Standard. He wrote his first boys’ adventure, Out of the Pampas, in 1868, and its popularity spurred him to write some eighty more children’s books.