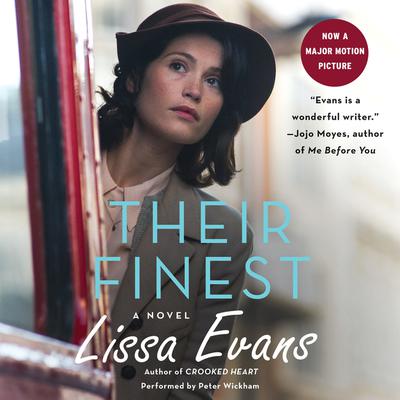 Their Finest: A Novel

From the author of the acclaimed Crooked Heart comes another “smart, funny, ingenious, revealing tale of London life during the Second World War” (The Independent)—longlisted for the Orange Prize upon its original publication in England.

It is 1940. France has fallen, and only a narrow strip of sea lies between Great Britain and invasion. The war could go either way and everyone must do their bit. Young copy writer Catrin Cole is drafted into the Ministry of Information to help “write women” into propaganda films—something that the men aren’t very good at. She is quickly seconded to the Ministry’s latest endeavor: a heart-warming tale of bravery and rescue at Dunkirk. It’s all completely fabricated, of course, but what does that matter when the nation’s morale is at stake? Since call-up has stripped the industry of its brightest and best, it is the callow, the jaded and the utterly unsuitable who must make up the numbers: Ambrose Hilliard, third most popular British film-star of 1924; Edith Beadmore, Madame Tussauds wardrobe assistant turned costumier; and Arthur Frith, whose peacetime job as a catering manager has not really prepared him for his sudden, unexpected elevation to Special Military Advisor. Now in a serious world, in a nation under siege, they must all swallow their mutual distaste, ill-will, and mistrust to unite for the common good, for King and Country, and—in one case—for better or worse....

“Evans displays a fine eye for detail and for the absurdities involved in filming. She also brilliantly evokes the disruption and dangers of wartime London. This funny, heart-warming and beautifully crafted novel is a must-read.”—Daily Mail (London)

“Gloriously observed…Hilliard is a wonderful creation—and Evans’s recreated propaganda scripts are a total joy. Delicious.” —Times (London)
“This is the truest and most enjoyable novel of home front life I’ve ever read; it’s touching and hilarious.” —Independent (London)